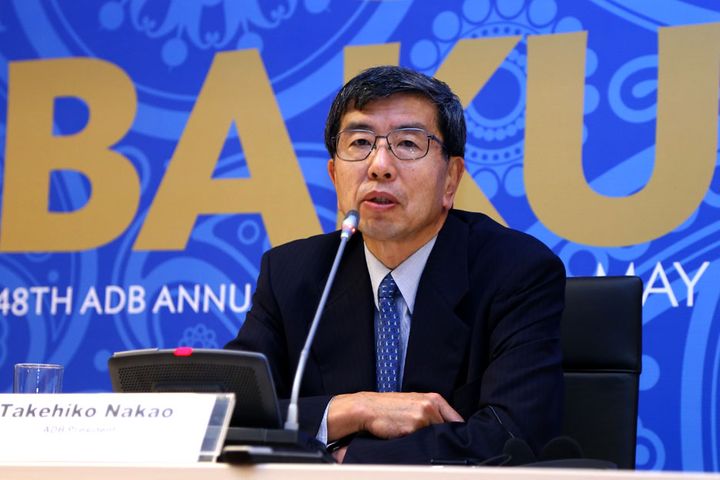 (Yicai Global) Sept.19 -- Asian Development Bank is switching presidents. Takehiko Nakao, the incumbent ADB president, announced his resignation on Sept. 17, one year and a half before the end of his second term.

The government will "quickly nominate a high-caliber candidate" to replace Nakao, Japan's Minister of Finance Aso Taro stated the same day that Nakao said he will bow out, adding Asakawa is the most qualified successor, thus suggesting the government will recommend him as the bank's new president.

Nakao will officially step down on Jan. 16 next year, but no information is available as to when his successor will be nominated or formally installed, Karen Lane, principal external relations commissioner at ADB's head office, responded to Yicai Global.

Set up in 1966 under the leadership of Japan, ADB, in which US and Japan are the largest shareholders, extends low-interest loans to countries in the Asia-Pacific region to address poverty and advance economic development. All nine ADB presidents have been Japanese.

Most ADB chiefs do not serve out their terms but leave early for various reasons before these are up, Yicai Global has learned. News of Nakao's resignation still surprised some people inside and outside the bank though rumors had swirled, said an ADB official who requested anonymity.

Asakawa, who has acted as vice finance minister for international affairs since July 2015 and just left Japan's Ministry of Finance in July, is the longest-serving senior diplomat at the post. He has attended international conferences, including G7 and G20 summits, several times in the course of his ministry career.

Given the rapid rise of The Asian Infrastructure Investment Bank, the new president's priority is to maintain the institution's influence in the Asia-Pacific Region, according to Japanese media.

Masatsugu has many focuses, Annalisa Prizzon, senior researcher at London-based think-tank Overseas Development Institute, also told Yicai Global. One of these is to push the relationship between the ADB and the AIIB on a track that favors coordination and cooperation rather than competition.