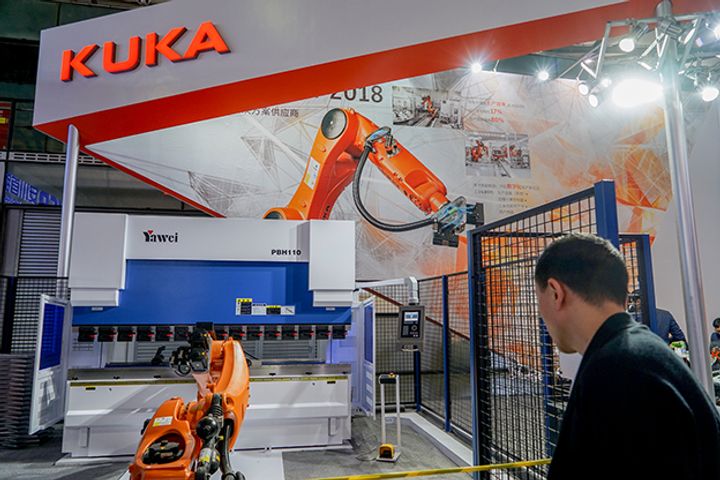 Kuka Aims to Grab Up to a Third of China's Robot Market by 2024, Local Head Says

(Yicai Global) June 13 -- Kuka, the German robot maker acquired by China's home appliances giant Midea Group, intends to take a share of the Chinese market of between 25 percent and 30 percent by 2024, according to the chief executive of its local unit.

Kuka is forging ahead with two factories in the country, which are expected to start mass production later this year, Wen Qiming said in an interview with Yicai Global at a sneak peek of its new production base in Shanghai. The other plant will be located in Midea's hometown of Shunde in southern Guangdong province.

Worth USD30 billion, China is the biggest robotics market, US trade magazine Machine Design has said. The country will lay claim to 40 percent of total worldwide sales by 2019, up from 27 percent in 2015, according to a forecast by the International Federation of Robots.

In the future, robots will enter every factory and home like computers did in the past, Wen added.

Kuka's new Shanghai plant is the company's second in the city. It will boost annual production capacity in the metropolis to 25,000 units. Annual output from Shanghai and Shunde combined is expected to reach 100,000 by 2024, he said.

The company expects profit of EUR550 million on revenue of more than EUR3.5 billion this year, Wen said. It is aiming for operating income of EUR4.5 billion in 2020. Rapid growth in the global robotics market, especially in Asia, offers good conditions to achieve that goal, he added.

Demand for robots in areas such as computers, communications, and consumer electronics is constantly increasing in the Pear River Delta, Wen said. That's why the Shunde plant will focus on medium- and low-end products such as robotic arms, mobile robots, and automatic carts for the logistics sector, he added.