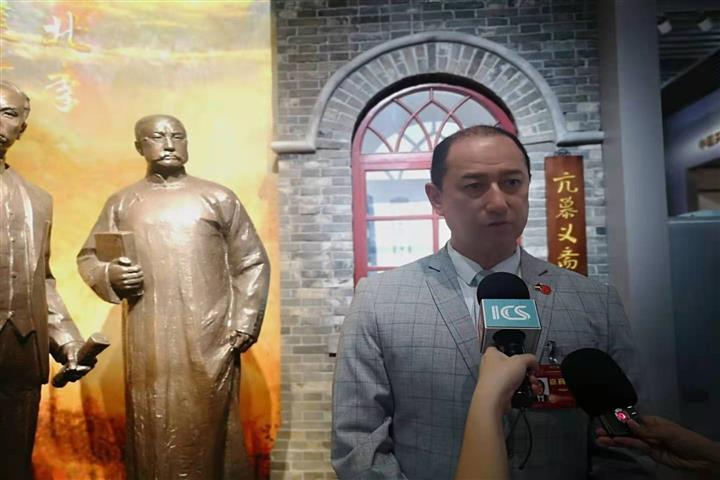 Mauritian Ambassador Gets to See Shanghai’s Greening Over 40 Years

(Yicai Global) June 18 -- Wearing Tang dynasty-style clothing and holding a selfie stick, the ambassador stood out among the other diplomats. Marie Roland Alain Wong Yen Cheong, who heads the Embassy of the Republic of Mauritius in China, wanted to record everything he saw.

The International Department under the Central Committee of the Communist Party of China and the CPC’s Shanghai Committee had invited foreign diplomats from more than 40 countries to Shanghai for a special dialogue called CPC Stories: the Practice of Thought on Socialism With Chinese Characteristics in Shanghai in the New Era Under the Leadership of President Xi Jinping.

Speaking to Yicai Global yesterday, Wong said he had been minister of Mauritius’ Ministry of Environment, Solid Waste Management and Climate Change as well as minister of Social Integration and Economic Empowerment before he took the position of ambassador to China last year. He also has a unique understanding of the development of Shanghai and China over the past 40 years.

Wong’s ancestors were members of the Hakka ethnic group that hailed from Meizhou in China’s southern Guangdong province. Even though his family has lived in multicultural Mauritius for generations, Wong said he has always had an innate affinity with China. Mauritius is the only African country that lists the Chinese New Year as an official holiday, he pointed out.

Wong and the other diplomats visited the green belt in Binjiang on the banks of the Huangpu river in Shanghai yesterday morning.

Wong said he has a photo from his first visit to the city back in 1983, when he came to order products for Mauritius. The photo shows a row of smoking chimneys in the background and garbage floating along the Huangpu. Huge changes have taken place since then, he said.

“The thick smoke and garbage are gone,” Wong said. “I did not see even a single piece of rubbish on the walkway in Binjiang today!” That was not just because it has been tidied up for the visiting diplomats, he added, noting he had visited the area for a private trip before and “saw exactly the same clean environment as today, which is a great achievement.”

Wong has visited Shanghai several times over the past 40 years and has seen the city become greener and greener, enabling residents to live more healthy lives, he said.

Wong also mentioned that the China-Mauritius Free Trade Agreement, China’s first FTA with an African nation, came into force this year, adding that it will benefit both countries.

Mauritius is a member of the African Union and the African Continental Free Trade Area, so the FTA makes it a good entry point for Chinese businesses into Africa, he said, adding that many have spoken with him about possible cooperation opportunities.