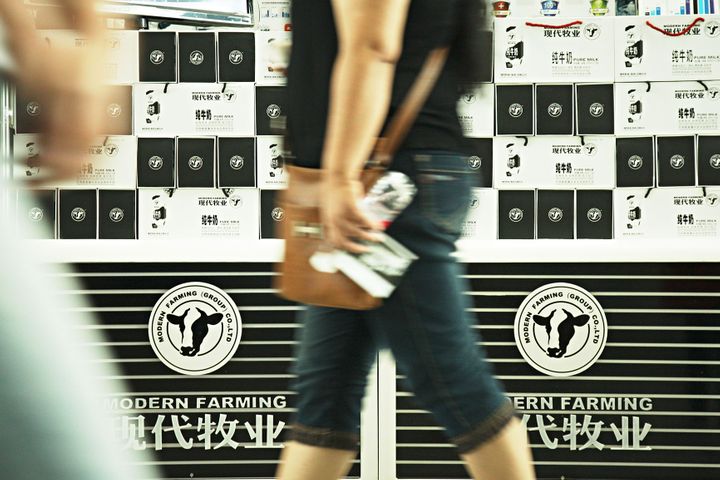 Insiders told a different story, however.

The losses resulted from the high cost of Modern Farming's large-scale breeding, they noted, as Legal Weekly reported yesterday.

Modern Farming issued an earlier profit warning expressing its anticipation that the six months ending June 30 will have registered a combined net loss attributable to its equity holders of at least USD73.5million (CNY500 million).

"China's raw milk offer price plunged in the first half of 2017 over the same period last year, with that of this company falling nearly 11 percent over the year prior," as Modern Farming explained its ailing performance, also noting that noncash losses and provisions for bad debts were also factors dragging company finances into the red.

"The decreased sales price of raw milk" is the most immediate cause, as senior dairy researcher Song Liang observed. "The raw milk market dominates Modern Farming. The current dairy market features decreased prices and restricted scale of milk collection from downstream firms. Modern Farming is not plagued by lower sales volumes at all, but its selling prices are indeed sliding, culminating in reduced operating revenue and gains.

"In my view, what truly underlies Modern Farming's plight is its oversized scale. Against the backdrop of an increasingly internalized dairy industry, China's players confront ever more pronounced disadvantages amid price competition for raw milk, which is why the company is losing money at the most fundamental level … 'the decreased sales price of raw milk' can only be the direct cause, while the 'underlying' factor is costly large-scale cultivation, engendering a lack of global competitiveness for raw milk."

"Admittedly, Modern Farming' clais are also valid to some extent, but they did not suffice to cause this loss," industry expert Wang Dingmian concurred with Song. "With so many pastures across China, why are all Modern Farming's counterparts immune to losses against the same market background?"

Wang argued that the firm has in effect taken a hit due to its own problems. "Its primary problems lie in excessive investment and scale, leaving its internal costs spiraling out of control. True insiders would be aware that it is extremely hard to manage the control of a pasture with a 10,000-head breeding base, which entails environmental protection, disease prevention, reasonable use of fodder and raw material purchases. For instance, in case of redundant fodder, deterioration will result, followed by increased costs. So, these are the real problems for Modern Farming, which would otherwise not be exposed to such substantial risks if it were a small business."

The company boasted 26 10,000-head fields with self-controlled operations in China, raising some 229,200 cows in total, as of December 31. These pastures are scattered across seven Chinese provinces or autonomous regions, including Heilongjiang, Hebei, Inner Mongolia, Shandong, Anhui, etc., Modern Farming's financial report of showed.

Its raw milk business posted an income of CNY3.988 billion, with the sales cost for the cow breeding business amounting to CNY2.763 billion, or 69 percent of the total proceeds, Modern Farming's annual financial report for last year indicates.