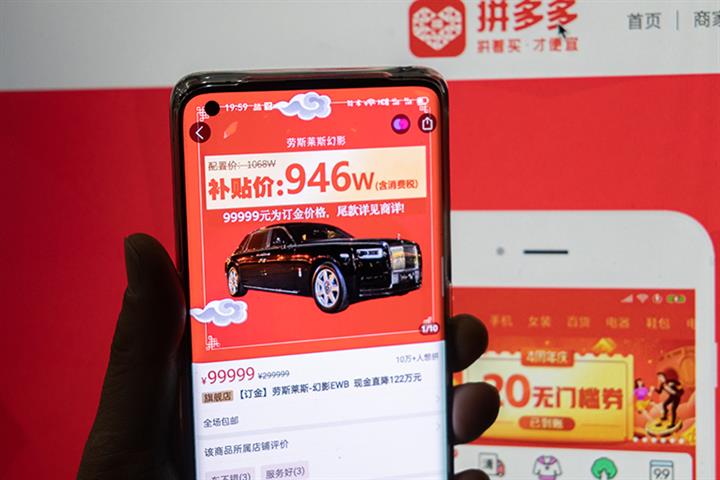 (Yicai Global) Dec. 18 -- Rolls-Royce said it is prepared to see its vehicles sold by various means if consumer interests and the luxury marque’s brand image are left unscathed after a vendor on a Chinese group-buying site offered a discount on its limousines.

The London-based automaker responded by saying it is willing to see e-commerce platforms take different marketing and sales approaches so long as that does no harm to consumer interests or its brand image.

In August, Pinduoduo also tried to sell the Tesla Model 3 in limited-time group purchases at a CNY20,000 discount, but the US automaker ultimately declined to deliver the cars to buyers, suspecting they planned to violate its ‘no resale’ policy.

The diametrically different responses of Rolls-Royce and Tesla to Pinduoduo's knock-downs relate to their sales model and vehicle prices, analysts said.

Tesla has a direct sales model, and the Model 3’s price is less than CNY300,000 for run-of-the-mill purchases, and so Pinduoduo's low-priced offering would disrupt its pricing. Rolls-Royce sells through dealers, and its price is relatively high. The e-commerce platform's users are not its usual customers, and so these sales would increase its brand awareness.

Rolls-Royce’s vehicle deliveries jumped 25 percent last year to 5,152 cars, the best sales performance in its 116-year history. China, which makes up about a quarter of the global total, is the firm’s second-largest market after the US. Its first sports utility vehicle, the Cullinan, sold around 2,000 units last year, making it Rolls-Royce’s hottest-selling new car ever.