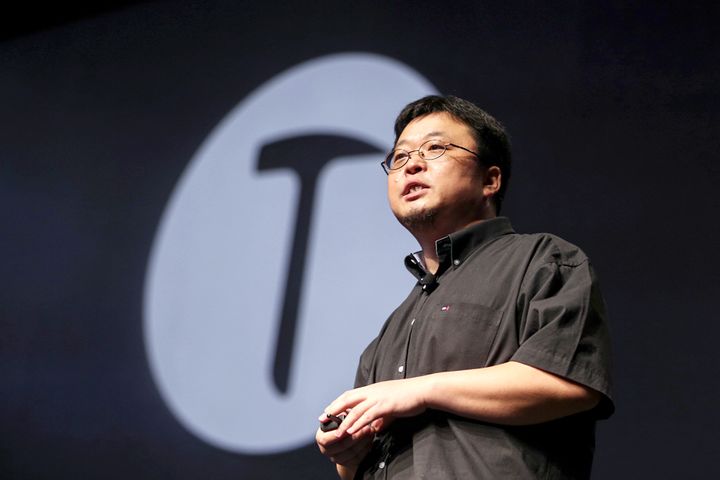 (Yicai Global) March 20 -- Luo Yonghao, founder of struggling Chinese smartphone and consumer electronics maker Smartisan Digital, said he plans to join the legions of retailers who have gone online to livestream sales of their wares during the Covid-19 epidemic.

The flamboyant Chinese businessman is also looking for product manufacturers to partner with him, he said yesterday.

The coronavirus epidemic has decimated traditional sales models by shuttering bricks-and-mortar outlets and encouraging people to stay home. This has forced many companies and individuals to look to e-commerce retail models such as livestreaming, which has already taken off in China.

"If the epidemic has had any impact on business operations, it is that it has made everyone aware of the urgent need to start doing live broadcasts and developing online models," said Li Yingjie, head of streaming agency Chenju Live Broadcast.

Alibaba Group Holding's e-commerce site Taobao saw an eight-fold increase in the number of livestreaming merchants last month and sales through livestreaming doubled. One million new vendors joined the site in February and the number of users increased by two and a half times. The volume of online orders is growing at over 20 percent a week.

A former English teacher, Luo set up Smartisan in 2012. The brand was once worth CNY1 billion (USD141.7 million). However, competition in the Chinese mobile phone sector is intense and, despite diversifying into other products such as e-cigarettes, the Beijing-based company failed to find a firm revenue stream and has found itself in financial difficulties.

Luo, who once said he planned to acquire Apple, has since gone on to give lectures and sell books about his entrepreneurial experience. He has 16 million followers on his Weibo account and many manufacturers have expressed their hope to work with him, an industry insider said.

"Sales made through our live broadcast channel account for almost 20 percent of all sales," Kuang added.

Many customers watch the online videos and then contact the merchant to place bulk orders. Livestreaming is a showcase for our wares, he added. His online shop has more than 400,000 followers and the firm hires two hosts to broadcast for three hours a day.

Many schools and universities remain shut and have turned to teaching online. New Oriental Education & Technology Group, a provider of private educational services, transferred all of its campuses, comprising over 80 schools and more than one million teachers and students, to online teaching in January, the Beijing-based firm said.

IPalfish, run by Beijing Duwo Technology, has seen its live broadcast foreign language courses multiply several times since the beginning of the year. During the epidemic, many people opted for one-on-one classes with Europe and US-based teachers.