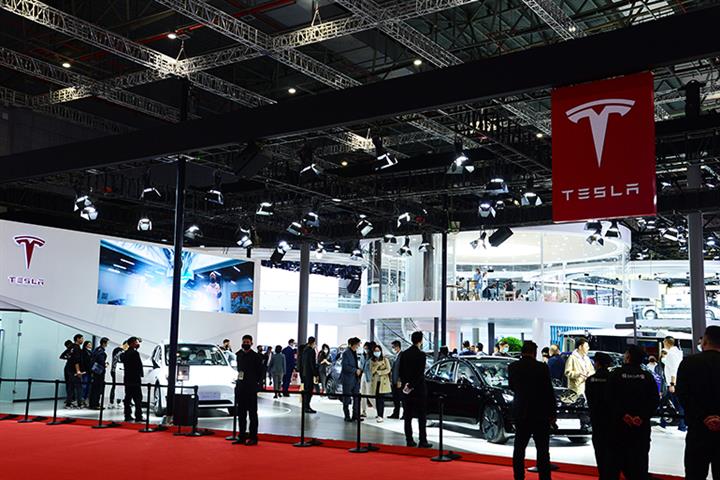 (Yicai Global) April 21 -- Tesla has apologized for its failure to resolve problems raised by Chinese owners in a timely manner amid a media backlash in China, an important market for the US electric automaker, after two disgruntled buyers caused a scene at Auto Shanghai.

Tesla issued its apology on Weibo late yesterday for not resolving the car owners’ problems in time and said it will cooperate with government agencies in their investigations regarding the issue. No such probe has been announced or reported yet.

Two days ago, one of two owners climbed atop a Tesla Model 3 at Auto Shanghai 2021, a major international motor show, yelling “the brakes are broken!” The woman, surnamed Zhang, allegedly has tried to return her vehicle after it was damaged in a crash. She blamed malfunctioning brakes; Tesla said the accident was due to speeding.

The California-based carmaker’s response to the protest at its Auto Shanghai stand was initially combative. “Tesla will not give in to consumers’ unreasonable demands,” its Beijing unit said via Weibo the same day. “There is no way we can compromise,” Tesla Global Vice President Tao Lin added.

Chinese state media has since rebuked Tesla for its reaction. “Who gave Tesla the confidence for its intransigence?,” Xinhua News Agency wrote yesterday, referring to Tao’s comment.

Zhengzhou’s State Administration for Market Regulation has tried to find a solution between the two parties three times, a person at the watchdog said yesterday. Tesla had not agreed to provide complete driving data, while the driver had refused to let a third party examine the vehicle.

Five government departments, including the SAMR, held talks with Tesla in February, asking the company to protect consumers’ rights and interests, CCTV News anchor Hai Xia posted on the broadcaster’s Weibo account yesterday. “We also hope regulators will launch relevant investigations soon to give consumers the truth,” she said.

Zhang is being detained for five days for disturbing the public order, the Qingpu district branch of the Shanghai police said yesterday. Consumers should express their opinions through legal channels and must not take drastic action, the police added, saying consumers will otherwise bear legal liability.