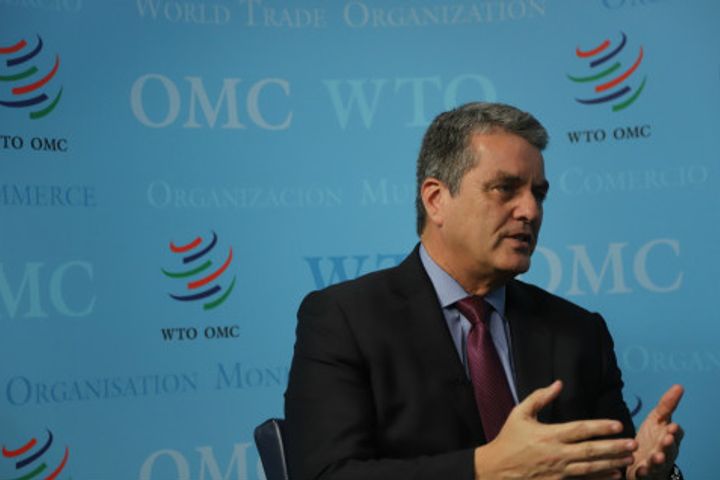 (Yicai Global) Feb. 20 -- Roberto Azevedo, director-general of the World Trade Organization, has given a "100 percent guarantee" that he will keep trying to push reform of the international trade body.

WTO members are now discussing changes to the Appellate Body, its dispute appeal's panel, Azevedo told reporters last month at the World Economic Forum in Davos, Switzerland. But he noted that the United States would most likely not join in.

US President Donald Trump has made it clear that the US has "misgivings about the WTO and the multilateral system," Azevedo said.

Azevedo, who has headed the WTO since May 2013, expects the pace of global trade expansion to reach 2.7 percent this year, slightly higher than last year's 2 percent.

"I'm not sure that we're seeing in terms of trade a declining curve," he said. "But we're not seeing anything dramatic that we should be cheerful about."

Question: How do you see the future of the Appellate Body? Will it continue to be dead? How are negotiations going on between the different parties?

Answer: As far as the Appellate Body is concerned, this is an ongoing conversation. We're still trying to figure out solutions for that. Some members are thinking of entering solutions. So if we cannot fix the body now, are there other mechanisms that we can use to solve the disputes? And in that situation, how to do it?

If we are going to fix the situation of the Appellate Body, we need to be thinking creatively. We need to be bold. We need to be ready for some significant changes. I don't think that this is something that we can fix with a band aid. It may require a more significant intervention to get an outcome that would be acceptable to the US and to others. And I give you a 100 percent guarantee that I will keep trying.

Q: Could you tell us which countries taking part in the discussions?

A: There are currently a number of papers being circulated. I know that the EU [European Union] has been meeting with other members. They have circulated papers. I have seen papers from other countries including Australia and Brazil.

Q: You highlighted some of the things that President Trump said. He has hesitation to misgivings about the WTO on the international multilateral trading system. But he did say today that we're working with the WTO. Can you give us a tip as to what those things might be?

A: First of all, this is an ongoing conversation. We didn't start conversations today. We have been in touch with the US administration. In Geneva, the US mission is very active. It is putting proposals on the table, proposals on reform, even in terms of transparency, negotiations, contributions of members, differentiated contributions of members, electronic commerce.

It's not like we didn't have any kind of dialogue or any kind of process going on with the U.S. This is an ongoing process, and we are happy that this process is going to continue.

To be frank with this administration, I think the tone was raised and the actions were much more disrupted in an attempt to make sure that these complaints were taken. Seriously, I think members do take these complaints seriously. They are ready to negotiate and to find solutions. But we are not quite there yet.

Q: Earlier today, President Trump said "Roberta and I have a tremendous relationship, and we're going to do something that I think will be very dramatic." Could you elaborate?

A: I think the conversation went well. I think the president made clear that they have misgivings about the WTO and in the multilateral system. It was not new to me. But I said if we have problems with the system, we have to address them. Anybody who has been in Geneva recently will notice that there is not one single meeting that goes by that somebody doesn't talk about reform. We all know that reform is needed. Now, how to do it, how deeply in what areas? That is what we need to discuss a little bit further.

I don't think we're talking about negotiating a package of reform or something like that. I have always been clear that, in my view at least, it is better to be pragmatic and reform where we can go as deep as we can when we can, and deliver wherever we can. Instead of trying to negotiate the big package of reform, because we will spend decades negotiating the package itself.

Q: What is your forecast on global trade?

A: So as far as trade expansion goes, our expectation is that 2020 is going to be better than 2019. But that's not saying much, because 2019 was probably one of the worst years of trade expansion in a decade or more.

We were at 2 percent last year. We're expecting that this year would be somewhere around 2.7 percent. There is a range between 1.7 and 3.7. So it's going to be better. But it is still below historic trends. So I'm not sure that we're seeing in terms of trade a declining curve, but we're not seeing anything dramatic that we should be cheerful about.

Q: Is there a real future for the WTO?

A: Absolutely, because if you don't have the WTO, you need to invent it again. It's simply unthinkable to have global economic trade relations today without some kind of body that harmonizes, that supervises, that is a platform for negotiations like the WTO.

I disagree with the notion that we have not negotiated multilateral deals. In fact, we have. Just a few years ago, we negotiated a trade facilitation agreement. That was a trillion dollar deal in terms of trade expansion potential. We did negotiate the elimination of agricultural export subsidies. We negotiated some elements of food security. We are also negotiating other types of deal.

It has always been the case that the WTO is not there only for multilateral deals. The WTO has been negotiating deals which are less than multilateral. Some are called plurilateral. Now, some are talking about joint initiatives which don't include all WTO members, but a big chunk of the membership is negotiating those things.

So as far as the negotiating pillar is concerned, we're doing well. Thank you very much! Could be better, absolutely. Could be worse, oh yes, definitely. Could be a lot worse.

Q: How about the WTO's progress in digital commerce negotiations? What's your view of digital taxation issue?

A: In the WTO, the e-commerce conversation is still shaping up. There are a number of elements that people are putting on the table, that we are trying to discuss. Taxation has not been put on the table in that context.

The GATT of 1947 already mentions that taxation has to be non-discriminatory, that you cannot be discriminating domestic products versus imported products. Once the product crosses the border, it is to be given national treatment. So there should be no discrimination.

Now, when you're talking about the digital economy, then gray areas pop up. I think that one of the problems we have now is that we have to identify what those gray areas are, where the concerns of some countries are and find solutions. I understand that the US and France have been talking about this and are trying to address this kind of concerns. But in the WTO, this has not been addressed directly.

Q: The US, EU and Japan have set new subsidy rules by themselves and criticized the WTO subsidy rules. What's your comment on that.

A: They did not set those new rules, to be clear. My understanding is that the US, Japan, and the EU issued a statement, if I can put it that way, I'm not sure if it was a statement or a document. I think it was a statement, where they say that the subsidies rules that exist today in the WTO are insufficient. That they allow for a high degree of distortion, which is introduced by other countries. And they would like to get an update of those rules. Subsidies is just one big element. There are other things that they mentioned, too.

But that frankly, is not new. People have been complaining about the fact that there are loopholes in the rules of the WTO regarding subsidies for quite some time. Those three countries or three groups decided now to make clear that they would like to see changes and that they would like to see something happening. And that's perfectly fair. I mean that's what we do all the time, is update the rules.