What’s the Future of China-US Trade? 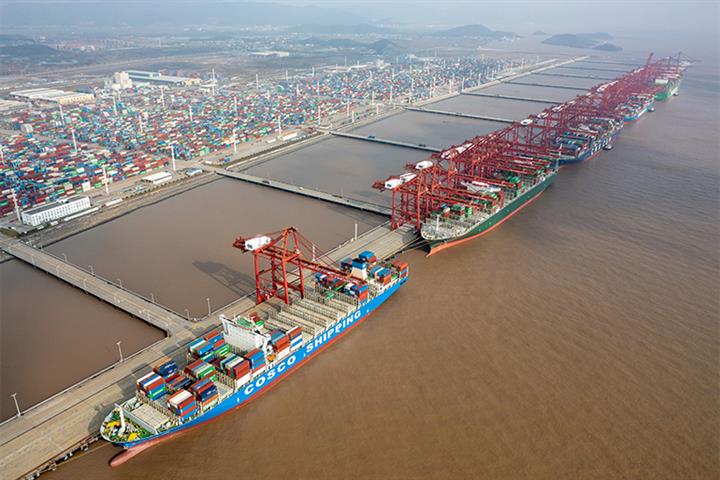 What’s the Future of China-US Trade?

(Yicai Global) Jan. 21 -- The historic Phase One trade deal reached between China and the US in January 2020 will expire this month. However, the Covid-19 pandemic, soaring inflation and ambitious targets, have made it hard for the two parties to meet the goals set out in the agreement. What lies in store for China-US trade?

Contrary to expectations, the trade deficit between China and the US has widened over the period. By last November, China was only importing 58 percent of the target, around USD380.5 billion worth of goods, from the US.

China was required to expand its purchases of goods and services from the US by no less than USD200 billion over the past two years. This goal was divided into three categories: a USD32 billion increase in purchases of agricultural products, a USD77.7 billion jump in manufactured goods and a USD52.4 billion rise in fuels. By November last year, agricultural goods had met 84 percent of the target, the manufacturing sector 58 percent and fuels 43 percent.

China’s imports of agricultural products from the US fared the best because the target was low at just 1.3 times of its imports in 2017, and because as a basic necessity there is stable demand and consumers are less sensitive to price changes.

However, the growth in purchases from the US crowded out other market players. For example, China’s share of the soybean market in Argentina and Canada fell to 3.4 percent from 5.3 percent, and the proportion of Canada's grain exports to China dropped to 12.3 percent from 17.9 percent.

The proportion of imports of aviation & aerospace equipment from the US decreased to 28.8 percent in 2020 from 55.3 percent in 2017. This had to do with the shrinking of cross-country logistics and the sharp decline of tourism.

And in 2021 Covid-19 variants affected economic recovery in Southeast Asia, leading to a severe global shortage of chips. The lack of chips put more pressure on the production of manufactured goods in the US, such as automobiles and aircraft.

Fuel purchases only met 43 percent of the target, which was set at an ambitious 7.7 times the value of imports in 2017 and became difficult to achieve as oil prices plunged in the early stages of the pandemic.

Although, China imported 7.1 percent more crude oil and 3.4 percent more natural gas in 2020 from a year earlier, plummeting prices meant that their value dropped 26.4 percent and 19.8 percent from 2019 to USD17.6 billion and USD4.2 billion respectively. As a result, the value of China’s fuel imports from the US only gained 1.4 times in 2020 from 2017 to USD9.8 billion. And natural gas imports are unlikely to increase much in the short term due to high shipping costs.

In the context of the Covid-19 pandemic, high US inflation and China’s efforts to stabilize growth, what changes will there be in the total volume and structure of China-US trade after their Phase One trade deal? Will the United States try to lower tariffs on Chinese goods? What new challenges will trade face?

High inflation undercuts the competitiveness of US exports. Energy products, agricultural goods and some manufactured items on the list of the Phase One agreement are mid- and up-stream in the value chain. High inflation in the US has pushed up the prices of mid-upstream products, weakened export competitiveness, squeezed profit margins at Chinese importers and subdued their willingness to import.

We can see that high commodity prices in the United States last year caused imported inflationary pressures to China. Economic entities spontaneously gave up high-priced commodities from the US to ensure operating profits at foreign trade enterprises and maintain relatively stable prices.

The cause of inflation, however, is different. In the past, it was mainly caused by large money supply and was demand-driven, while this round of inflation is also cost-driven. The loose supply of US dollars formed the base for inflation, with demand pull amid restricted supply of energy commodities the direct cause, while the cost push with spiraling wages and inflation is the main factor behind growing US inflation.

During the pandemic, structural unemployment, job conversion and early retirement in the US have exacerbated cost-driven inflation. According to macroeconomic theory, with money oversupply and cost-driven inflation, social output drops further and the jobless rate remains high, resulting in insufficient production and supply, weak export momentum and decline in growth.

(The author is chief economist and head of the Zhixin Fund research institute as well as director of the China Chief Economist Forum.)