April Data Much Weaker Than Expected: Is the Worst Over? 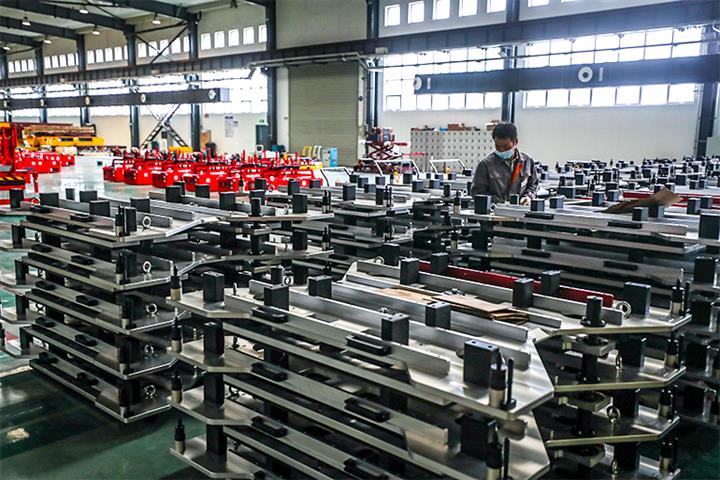 April Data Much Weaker Than Expected: Is the Worst Over?

This was the question on everyone’s lips this morning as our compound received a shipment of fresh Japanese sea bass (鲈鱼) – two live fish in water sealed in a plastic bag for CNY55 (USD8.25).

My wife will steam a fish for dinner tonight. She already brightened up our place with a huge bouquet of fresh-cut flowers – peonies, sunflowers and tiny yellow roses – and some bottles of imported Spanish wine.

Our day-to-day lives are cheerier and more colourful than they were last month and it is a great pleasure to stroll around the grounds of our compound and enjoy the warm sunlight.

April appears to have been the low point. But few of us understood just how bad things were.

On May 16, China’s National Bureau of Statistics (NBS) released its key economic data for April. The year-over-year growth rates of industrial value-added and retail sales were not only worse than expected, they actually fell below the predictions made by the most pessimistic of the economists surveyed by the Yicai Research Institute (Table 1).

Our monthly GDP indicator, which is a weighted average of the year-over-year growth of industrial value-added, the NBS’s index of service production and an estimate for agriculture fell to -4 percent, its lowest reading since April 2020 (Figure 1). 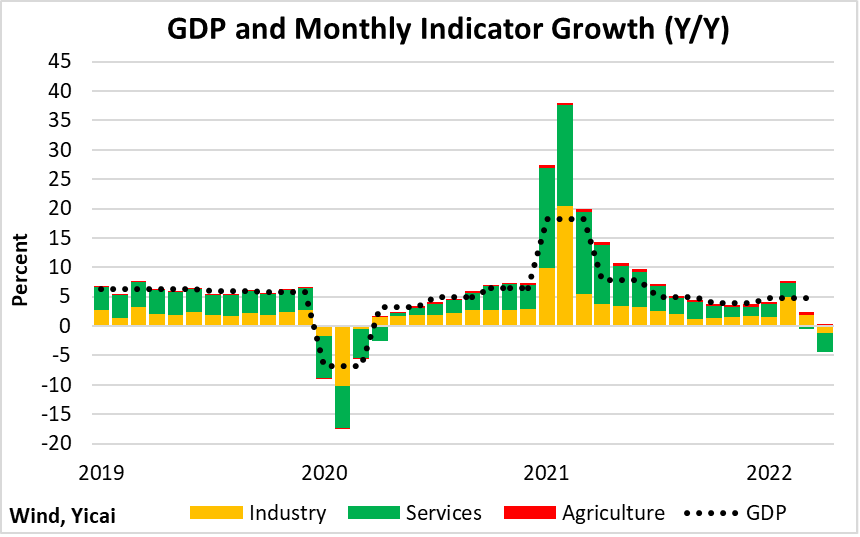 Understandably, the sharp economic slowdown has made firms less eager to hire new workers. For the second month in a row, new jobs created in the formal urban labour market fell well below the same period last year (Figure 2). 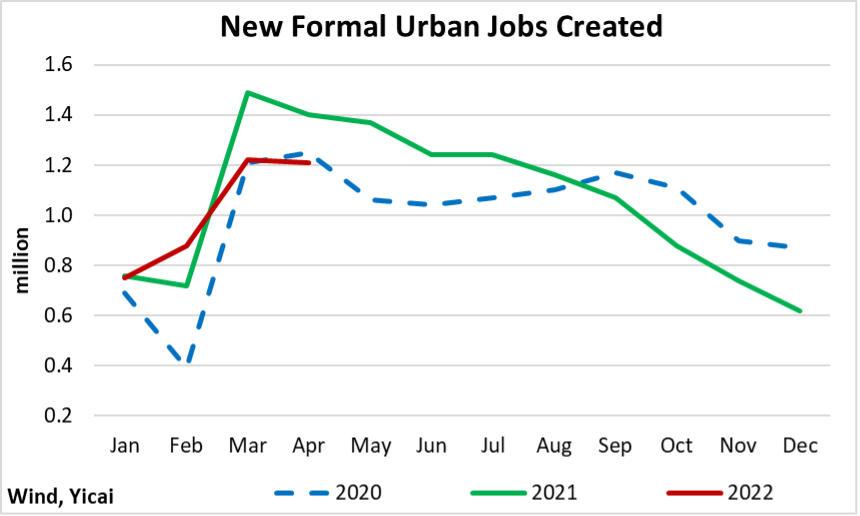 As a result of weak labour demand, unemployment has risen rapidly (Figure 3). The NBS’s urban surveyed unemployment rate rose to 6.1 percent in April or just below the recent peak of 6.2 percent recorded in February 2020. The current cycle has been very tough on young workers, with the unemployment rate of those aged 16-24 reaching a new high. 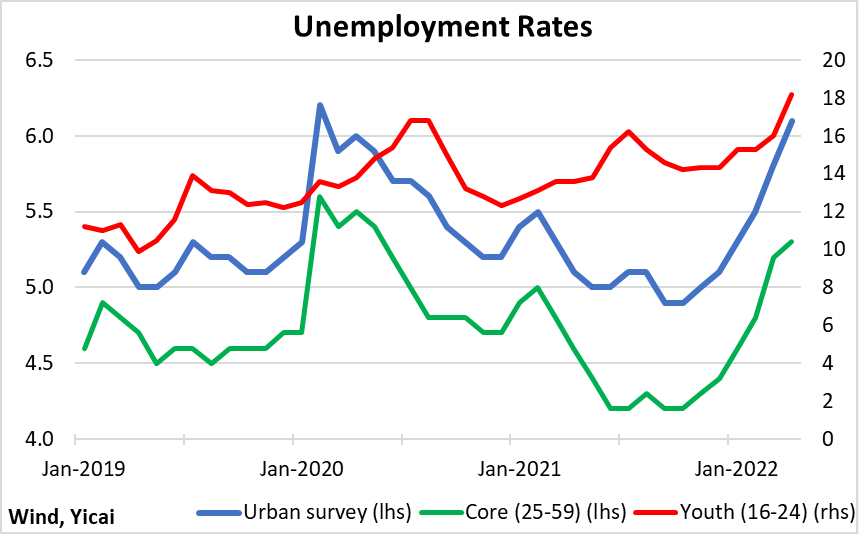 The only good news out of the labour market this month was that weekly hours worked remained fairly robust. At 46.2, they slipped slightly from the amount recorded in 2021 but remain well above the 2019 level (Figure 4). This suggests that, despite the slowdown, employers are not aggressively cutting back on their current headcount and that firms will be ready to service the rebound in demand when the economy fully reopens. 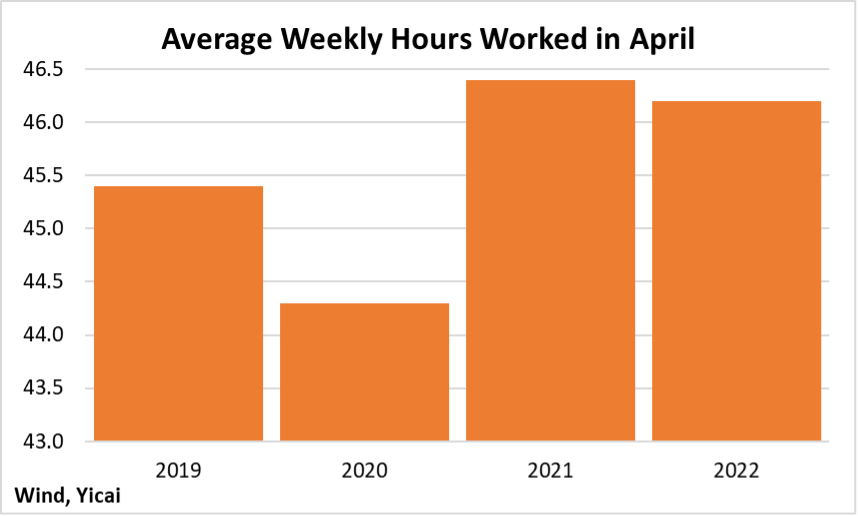 With all the uncertainty caused by the pandemic and the measures taken to limit its spread, it is not surprising that few have the confidence to buy a new home. The volume of new home sales in the first four months of the year was down 25 percent from the same period in 2021. However, last year’s sales were particularly strong (Figure 5). Sales this year are down some 9 percent from what we typically see in the January through April period. 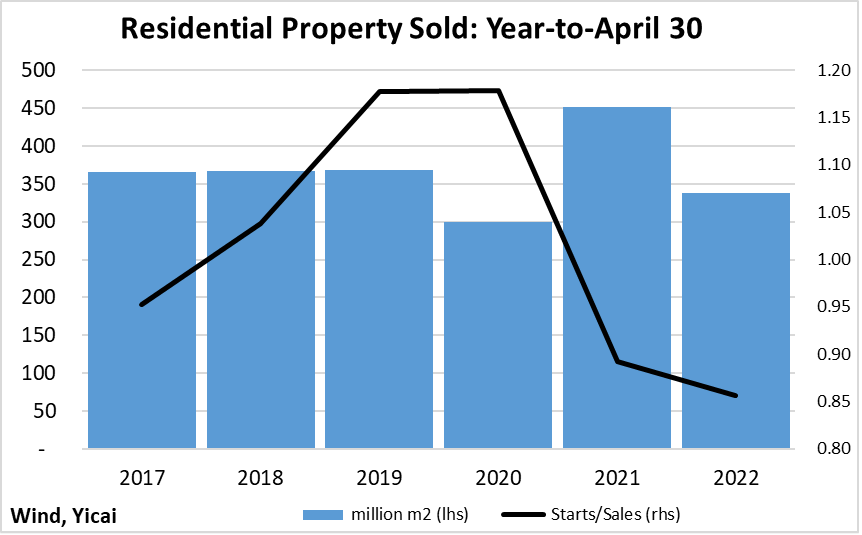 This year the ratio of homes started to homes sold (Figure 5 above) is about 15 percent lower than what has been normal over the recent past. The pressures on developers to reduce their leverage are only compounding their reluctance to undertake new projects before the Omicron outbreak is fully under control. The good news is that, even at this year’s low level, there is enough housing demand to justify a pickup in building activity.

Was April the economy’s lowest point?

May got off to a bad start. Data from the Ministry of Tourism and Culture showed that the Omicron outbreak reduced people’s appetite for travel and merrymaking over the five-day Labour Day holiday: domestic trips fell by 30 percent and spending by 43 percent from last year.

Still, there are some hopeful signs.

First, the number of new infections continues to fall (Figure 6). Here in Shanghai, we had less than 1000 for two consecutive days. That’s down from some 27,000 in mid-April. Elsewhere in China, there are fewer than 300 new cases per day. 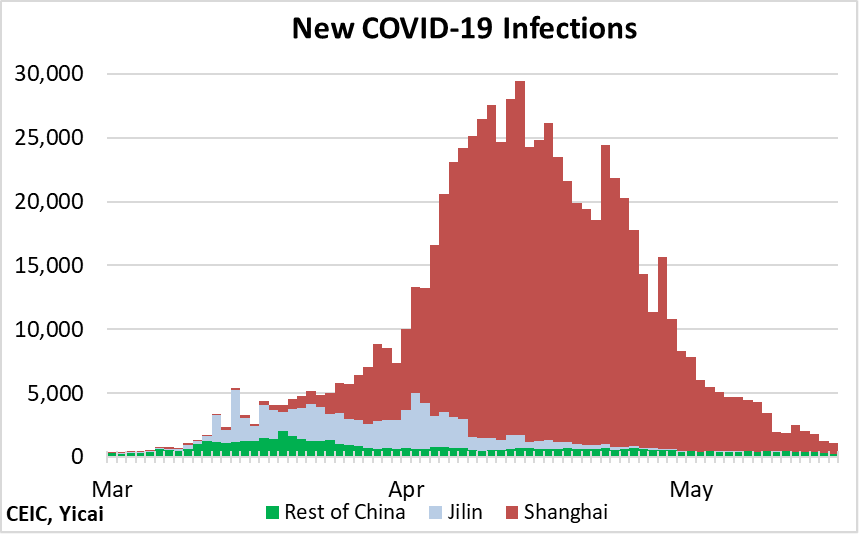 The fall in new cases is leading to a relaxation of mobility restrictions. Our 30-city traffic congestion index shows that the mobility gap between this year and last has narrowed from 9 percent in early April to 3 percent most recently (Figure 7). While mobility measures are still down significantly in Beijing, Shanghai, Zhengzhou and Changchun, some of the slack is being picked up by Fuzhou, Quanzhou, Nantong and Ningbo, which report higher mobility than last year. 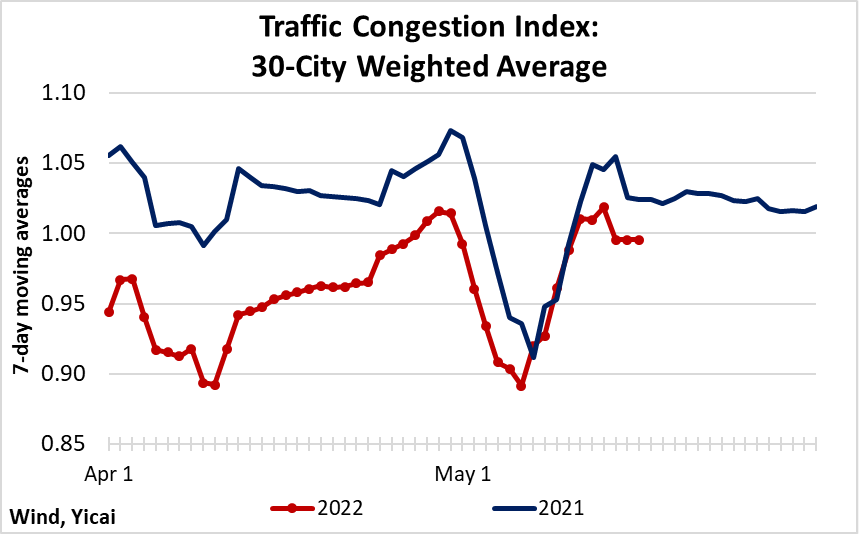 Local economists are debating how the government should respond to the economic slowdown. Credit conditions have been relaxed and the macro leverage ratio (a broad measure of the economy’s indebtedness) rose in Q1 after five quarters of decline. Almost all of the increase came from the indebtedness of non-financial corporations. 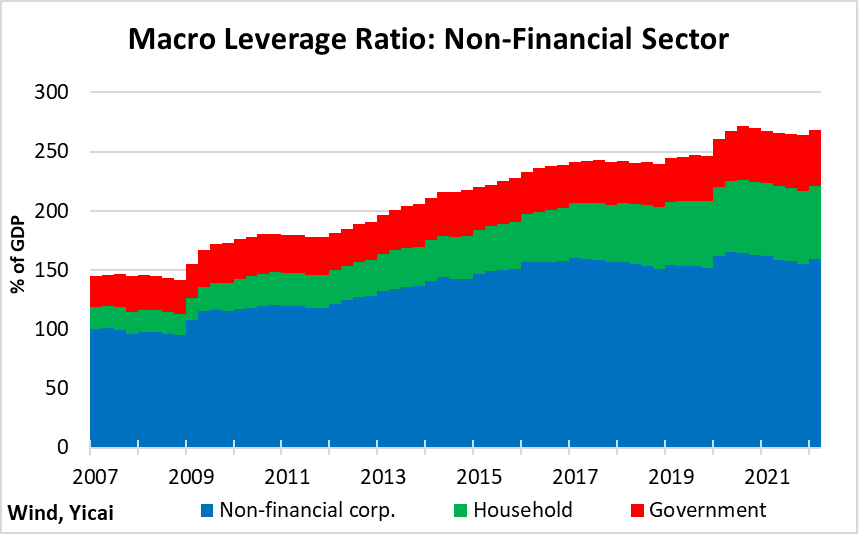 There has also been an active program of investment in infrastructure projects (Figure 9). According to NBS spokesman Fu Linghui, China has plenty of scope to boost infrastructure spending since its per capita stock of infrastructure is only 20-30 percent that of developed countries. Fu said that investment in water conservancy, education and health have increased rapidly. He also noted that, so far this year, investment in advanced manufacturing projects, such as integrated circuits, has been robust. 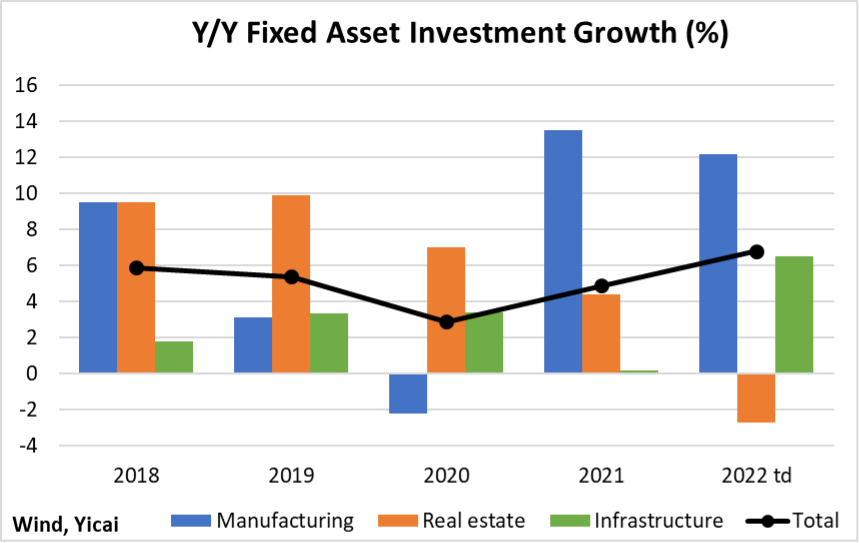 Some economists want the government to do more to support the economy. They suggest it distribute consumption vouchers to boost demand. But I think that the government has to be careful. The pandemic shock has affected supply as well as demand. According to Fu Linghui, about half of Shanghai’s 9000 large industrial enterprises have yet to resume production. So, boosting consumers’ purchasing power could just end up fuelling inflation if the economy is unable to produce and deliver the additional goods.

I think the government should continue its policy of encouraging forbearance. It could broaden its scope where appropriate.

In April, the People’s Bank of China announced that financial institutions and the platform companies are expected to exercise forbearance when the pandemic has made it difficult for borrowers to service their loans. Similarly, Shanghai’s state-owned real estate firms are waiving rent payments for small businesses that have had to shut down.

While our family is able to buy fish, flowers and tempranillio, not everyone is so lucky. We have also benefitted from the food and daily use items – like toilet paper, soap and shampoo – that have come to us from the government via our Neighbourhood Committee. The government should reinforce the Neighbourhood Committees’ ability to ensure that everyone has what they need to make it through the pandemic’s final stretch.