How Can China Achieve Carbon Neutrality By 2060? 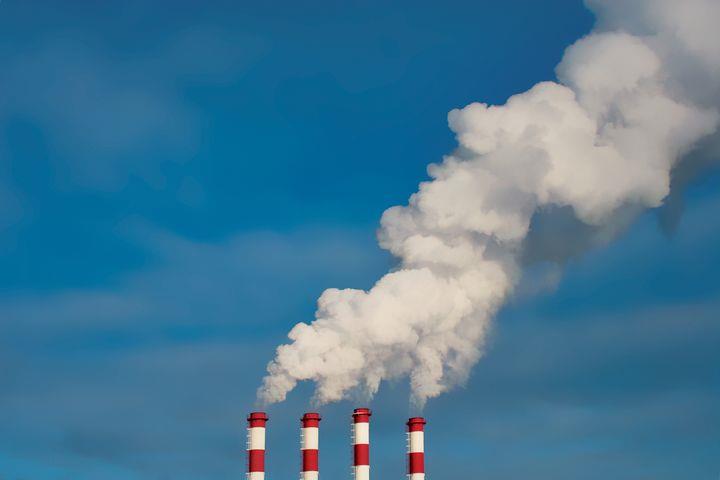 How Can China Achieve Carbon Neutrality By 2060?

(Yicai Global) Nov. 1 -- As a result of its immense population and the highly industrial nature of its GDP, China is the world’s largest emitter of CO2, accounting for close to 30 percent of global emissions in 2019.

However, Chinese people do not lead particularly carbon-intensive lifestyles. Figure 1 shows that on a per person basis, China’s emissions are about half American levels and about 7 percent lower than what we see in Europe. It is just that there are almost twice as many Chinese as there Americans and Europeans combined.

Industry and construction account for a much larger share of China’s economy than those of the US or Europe. While the share of services in the Chinese economy is increasing, China’s industry is by no means shrinking and it continues to have significant energy needs. Indeed, industry accounts for two-thirds of China’s energy consumption.

In addition, China is the world’s largest exporter. Exports account for about a fifth of the economy and a significant portion of China’s emissions comes from the transformation of raw materials into goods that are consumed by people living in other countries.

President Xi Jinping recently committed China to go carbon neutral by 2060. This will entail a massive structural change in the economy. As Figure 1 shows, emissions in China continue to grow, whereas they are declining in the US and Europe. This is, in large part, due to China’s GDP growing about three times as fast as those of the other major economies. 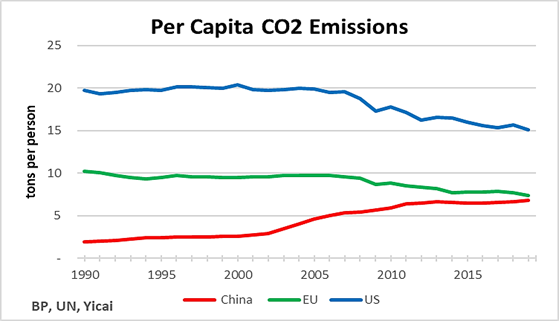 China has not yet published a detailed roadmap for how it will attain carbon neutrality by 2060. However, there appear to be three margins upon which it can operate to achieve its goal.

First, it can reduce the energy-intensity of its output. Even if we assume that the economy grows at modest rates for the next 40 years, it is likely to be more than twice as large as it is today. So, carbon neutrality implies a massive reduction in the amount of energy needed to produce 1 RMB of GDP.

A lot can happen in 40 years. Indeed, 35 years ago, when I was studying Chinese in Tianjin, it took more than three times as much energy to produce 1 RMB of GDP as it does today (Figure 2). As recently as 2008, producing a unit of GDP took 50 percent more energy than it does today. China has steadily become much more energy efficient over time and it will need to continue this trend into the future.

A slower pace of urbanization will support a less energy-intensive economy. In recent years, China built myriad structures and transportation systems to accommodate the hundreds of millions of people that moved into its cities. The steel and cement needed for these investments required huge amounts of energy. With much of the urban infrastructure now in place and a more stable urban population, this demand for energy should fall. A declining population and a more service-based economy will also help reduce future energy intensity. 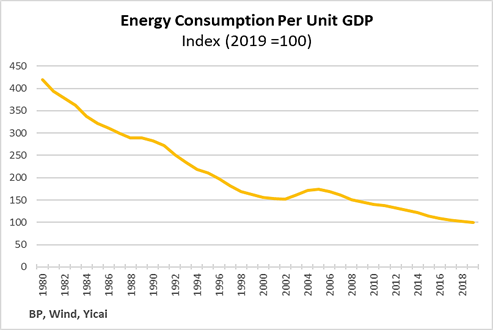 The second margin upon which China can work is the carbon-intensity of its energy supply. By relying less on fossil fuels, China can reduce the amount of emissions from producing a given amount of energy. China still burns coal for almost 60 percent of its energy needs. However, hydro, nuclear and renewables – like wind, solar and biofuels – only generate a small fraction of the CO2 coal does to produce the same amount of energy.

Figure 3 shows a projection, by Tsinghua University’s Institute of Energy, Environment and Economy, of what China’s energy mix in 2060 might look like, compared to what it was in 2019. The share of energy generated from fossil fuels will fall from 85 to 13 percent. Nuclear’s share will rise from 2 to 19 percent and that of renewables will jump from 5 to 53 percent. 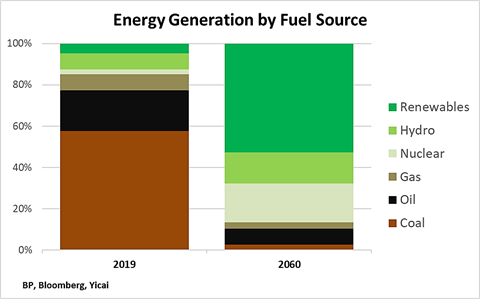 A transition of this magnitude will require enormous investments. Hector Pollitt, head of modelling at Cambridge Economics, estimates that investment in the power sector alone will be $4 trillion (undiscounted) above baseline over 40 years. That’s close to 30 percent of China’s GDP last year.

As Figure 3 shows, China will still consume some fossil fuels in 2060 and, given the size of its economy, it will likely emit a significant amount of carbon. So, the third margin China needs to explore is the increased use of carbon sinks. Options include carbon capture and storage, reforestation, a greater use of wood in construction and more sustainable farming techniques.

China’s commitment to carbon neutrality is significant. According to Climate Action Tracker, which independently monitors countries’ climate-related activities against the Paris Agreement’s goals, China’s going carbon neutral by 2060 will reduce global warming by 0.2 to 0.3 degrees to 2100.

Unfortunately, China’s commitment, on its own, is not enough for the world to achieve the Paris goals. Climate Action Tracker estimates that the world’s temperature will still rise by 2.4 to 2.5 degrees by 2100. Nevertheless, what China’s commitment has done is incite others to follow up. Just this week, Japan's new prime minister, Yoshihide Suga, committed his country to a carbon-neutral society by 2050. Japan is the world’s fifth-largest emitter of CO2.

I am a technology optimist. I think that potentially great advances could be made in the use of hydrogen fuel cells for transportation. And I recently read that scientists were able to capture thermal motion from graphene and convert it to electricity. This opens the possibility of potentially limitless, clean, low-voltage power.

While we cannot plan for technology to bail us out of the climate change crisis, technological solutions are more likely to be found if policymakers have committed themselves to addressing the problem.