How Can China Promote a Sustainable Increase in Household Consumption? 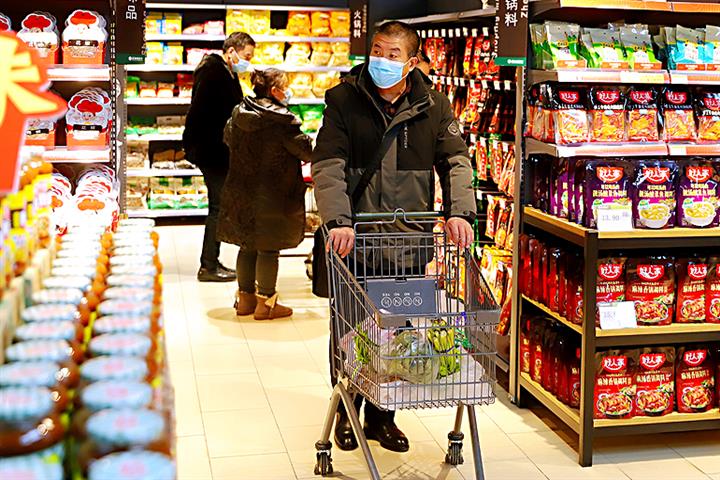 How Can China Promote a Sustainable Increase in Household Consumption?

(Yicai Global) March 4 -- The IMF’s January World Economic Outlook forecasts that the global economy will grow by 5.5 percent this year, after having declined by 3.5 percent in 2020.

Despite this rebound, the IMF expects economic activity in China’s trading partners to remain quite subdued. Figure 1 compares the IMF’s current GDP forecasts (the solid lines) with the one made a year ago (the dotted lines). In both Advanced Economies (AEs) and Emerging Market and Developing Economies (EMDEs) excluding China, the IMF expects that GDP will only barely return to their end-2019 levels late this year.

Perhaps more importantly, the level-difference between the IMF’s current forecast and the one it made a year ago is huge. For both AEs and EMDEs ex-China, the gap represents about two and a half years of lost growth. 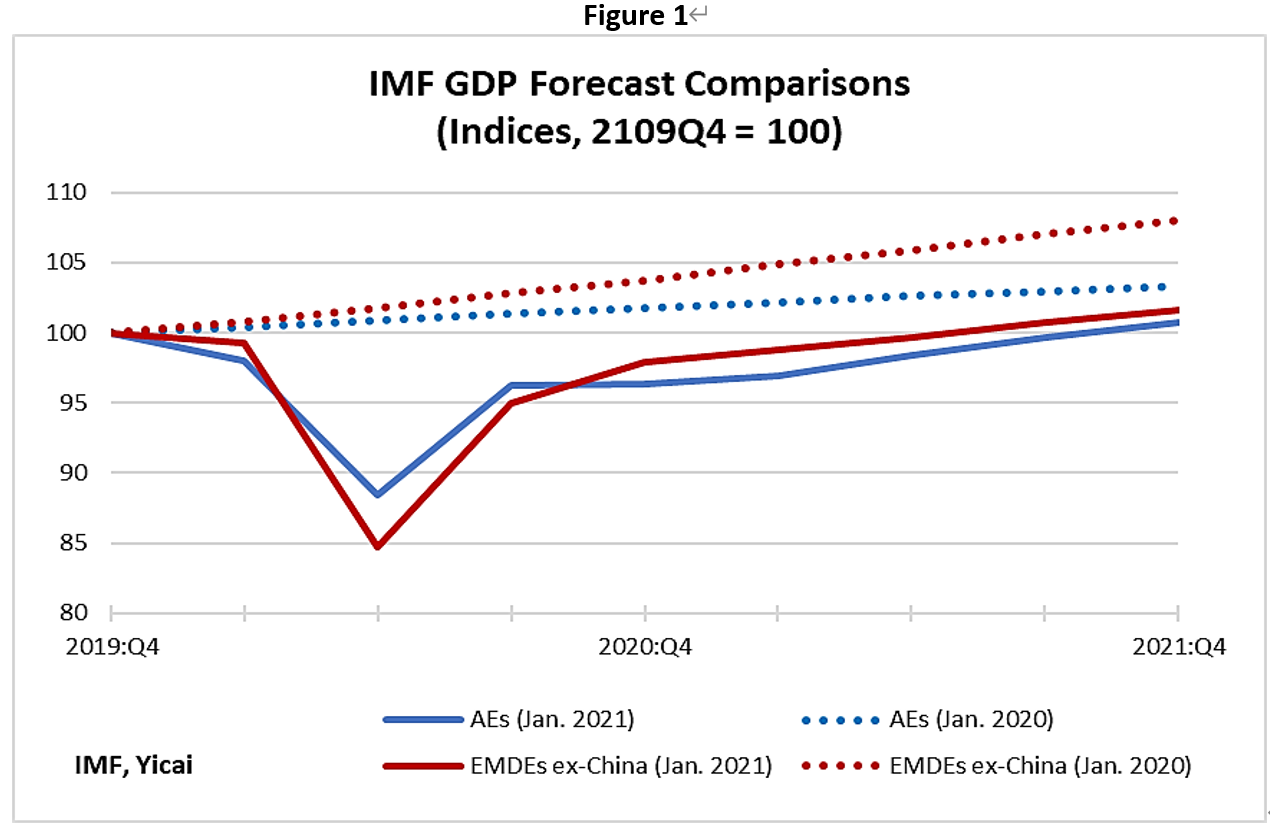 Despite the weakness in foreign GDP, Chinese exports were robust last year. Special factors were at work. The pandemic led foreign demand to shift from services to goods. The demand for information and communication technology and personal protective equipment was particularly strong. Since it was able to get its supply chains up and running quickly, China was particularly well placed to meet this demand.

The risk is that China’s trading partners have already gone on a shopping spree and their future demand for Chinese goods could weaken. Moreover, with foreign supply chains increasingly in working order, China is bound to face more export competition.

Over the medium term, it will be difficult to sustain foreign demand without strong GDP growth in China’s trading partners. Should the weakness abroad persist, China’s household consumption will have to play a larger role in driving its economy.

Economic theory suggests that there are two ways to sustainably stimulate consumption – by reducing savings and by increasing incomes.

Government policy can lead households to reduce their savings by adjusting prices or changing risk perceptions. Such policies can allow households to feel comfortable spending more at current levels of income. Relative to policies that raise incomes, those aimed at reducing savings are more likely to have a rapid impact on spending.

Figure 2 shows that, even before the pandemic, Chinese households’ expenditures grew somewhat less rapidly than their incomes. This led their already high savings rate to increase. Then, in the face of the uncertainty caused by the virus, the savings rate spiked last year. While much of that increase seems to be temporary, there appears to be room for policy to address the high rate of household saving. 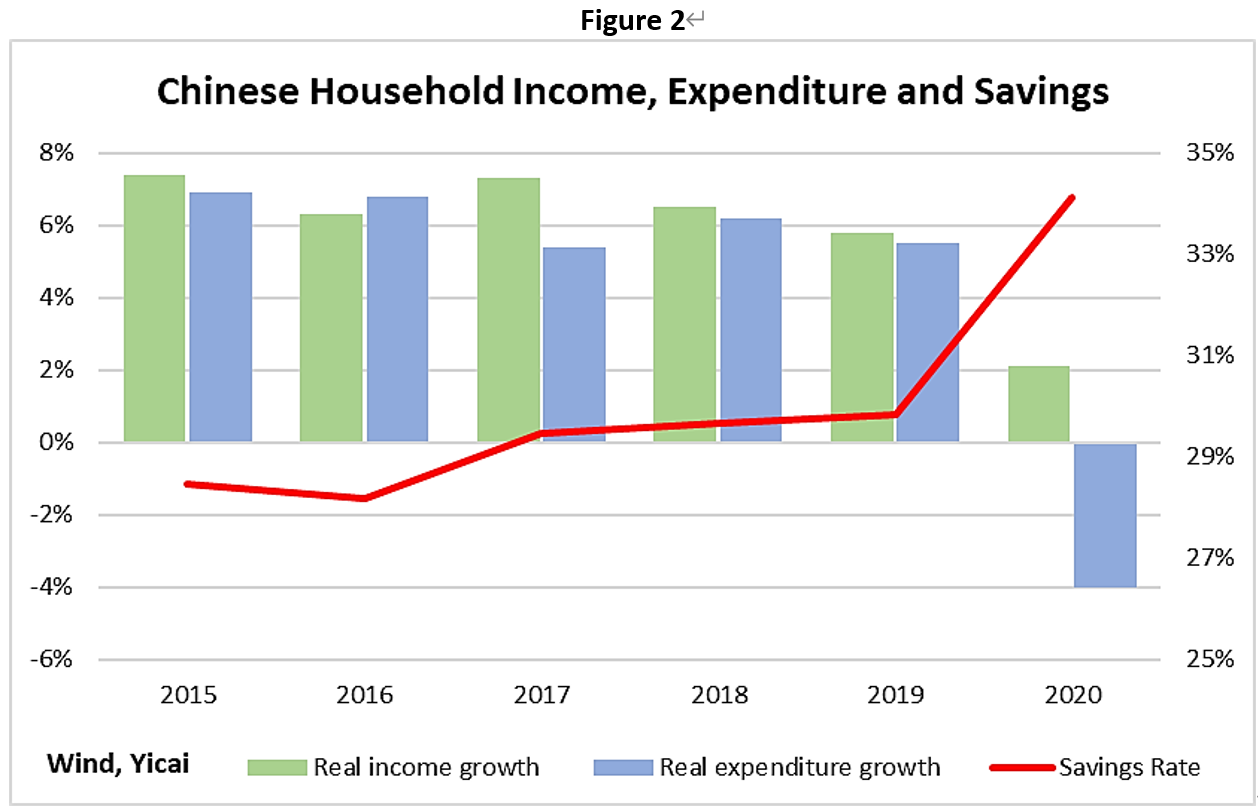 One of the reasons that Chinese families save so much is to buy a home. The cost of housing in China’s cities, relative to income, is exceptionally high. While expensive housing is largely a function of fundamentals, the government has scope to improve housing affordability.

One factor that drives families to buy their apartments rather than rent is uncertainty over the future stream of their rental payments. The economics of renting often compares very favorably with those of owning. However, leases in Chinese cities are typically only one year long and there is no limit on how high a landlord can raise the rent once it has expired.

Improving long-term rental policies, by adopting international best practice, could eliminate much of the uncertainty over future rental payments. This would support the market for rental properties and address a major cause of high savings.

Many apartments in Chinese cities are purchased as investments but are left vacant, rather than rented out. This is because holding costs are very low. A recurrent property tax would be a good way to keep these apartments occupied and rental costs low, in line with the government’s long-stated principle "housing is for living, not for speculation."

Another of households’ key motivations to save is to insure themselves against unforeseen events, such as job losses or debilitating illnesses. One way to reduce such precautionary savings is through risk pooling, like employment and medical insurance. While China does have such programs, the number of people covered and the amount of coverage can be expanded.

Such an expansion of the social safety net need not involve an outlay of public resources. It could be entirely funded via employee and employer contributions.

The Chinese tax system penalizes consumption and rewards saving. It relies heavily on consumption taxes. Compared to taxing incomes, taxing consumption is regressive, since poorer households spend a relatively large fraction of their incomes. A rebalancing of tax policy could redistribute income from savers to spenders and support consumption with no fiscal cost.

The payoff from policies to increase productivity typically only cumulates slowly over time. It is unlikely to result in a quick boost to consumption. Nevertheless, if well-implemented, such policies are likely to be sustainable since the rise in incomes they create should support the costs of the initial investment.

To increase productivity, the government could undertake policies which ensure that resources flow to their most productive ends. In particular, it should reduce barriers to the creation of a vibrant private sector by eliminating red tape and lowering costs.

In recent years, regulatory reforms have markedly improved China’s business environment. According to the World Bank’s Doing Business Report, China now ranks 31st out of 190 countries in terms of the ease of doing business, just ahead of France and behind Spain. In 2014, it ranked 96th, between the Maldives and the Solomon Islands.

Policies to stimulate household consumption can have positive effects on aggregate demand. However, such demand management must be undertaken prudently. It is important to be on guard against two risks.

The first is an excessive increase in household debt. As the People’s Bank of China has recently said, it is not appropriate to rely on consumer finance to expand consumption. This is because consumption itself does not generate the income needed to service the debts incurred.

The second risk is an unwarranted use of government subsidies. Consumption subsidies could be useful in some instances. Indeed, last year, 170 Chinese local governments issued consumption vouchers worth CNY 19 billion ($2.9 billion). These subsidies gave a needed boost to local economies in early 2020, when pandemic-related uncertainty was at its peak. However, vouchers cannot deliver a sustainable increase in household consumption. Fiscal resources are limited. They are best used to invest in public goods that will increase productivity or reduce uncertainty.

Last week, the Party’s top leadership met to discuss the draft 14th Five Year Plan (2021-2025). One of the key structural areas considered was the strategy of expanding domestic demand (扩大内需战略). It will be interesting to see what measures policymakers adopt to unleash the power of the Chinese consumer, when the Plan is unveiled later this month.