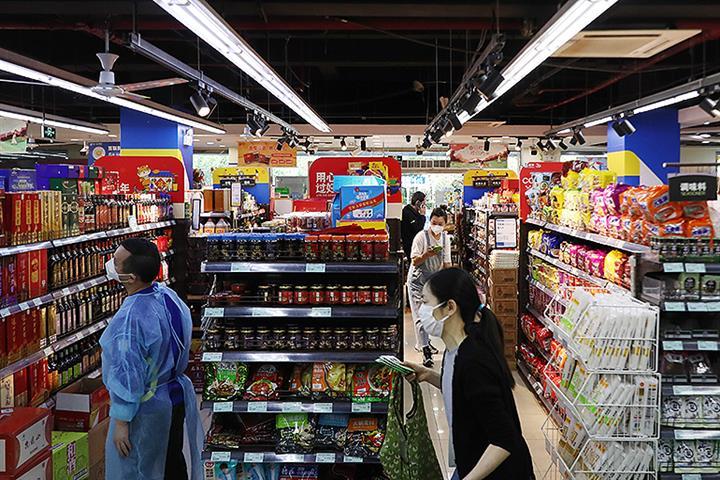 After having been confined to our homes since late March, we are now permitted to take to the streets. Yesterday, I celebrated by cycling to my favourite French bakery for a delicious loaf of five-grain bread. Along the way, shopkeepers swept out their storefronts as the smells from sidewalk eateries filled the air. People were everywhere – the vibrant press of humanity that is Shanghai.

With the restrictions lifted, I suspect that the Shanghainese are ready to enjoy a serious course of retail therapy. Indeed, China’s ecommerce firms are already hard at work offering promotions for this month’s “618” shopping festival. During Alibaba’s earnings call last week, its Chairman and CEO, Daniel Zhang, said that merchants are excited and they see the festival as a good opportunity to make up for some of the sales they lost in recent months.

The Omicron outbreak was challenging for Alibaba, both in terms of falling consumer demand and supply chain disruptions. Nevertheless, it did its best to support communities in need.  It dispatched thousands of couriers and frontline workers from various regions in China to Shanghai. Ele.me, Alibaba’s food delivery service platform, distributed more than 2.5 million pharmaceutical orders to homes in Shanghai in April. Alibaba’s mapping service provider, Amap, now shows the location of COVID test sites on its app. And Alibaba’s online retail platforms, Taboao and Tmall, launched measures to relieve their merchants’ cashflow pressures.

Like Tencent, Alibaba is deeply embedded in the everyday lives of Chinese people. It is typically thought of as being China’s Amazon and while there are certainly some similarities, there are important differences between the two ecommerce giants.

While both companies are engaged in a variety of business lines, online retailing generates most of their revenue. Alibaba’s business model is lighter. It simply offers marketplaces for individuals (Taobao) or branded firms (Tmall) upon which to sell their products. In contrast, Amazon owns most of the goods it sells. The costs that Amazon has to incur to purchase and warehouse its inventory weigh on the margins of its online retail operations. In fact, Amazon’s retail operations make a relatively small contribution to the company’s bottom line. In contrast, almost all of Alibaba’s profits come from ecommerce.

Amazon dominates a fragmented US market. This year, US online retail sales are expected to hit USD1 trillion and Amazon’s share of the market is projected to reach 40 percent. The share of Walmart, the US’s number two ecommerce retailer, is only anticipated to reach 8 percent.

China’s ecommerce market is more than twice as large as the US’s. In 2021, the gross merchandise value (GMV) of the three largest ecommerce firms – Alibaba, JD.com and Pinduoduo – was some CNY 14 trillion (USD2.0 trillion). Alibaba’s China GMV was CNY 8 trillion, but it faces serious competition (Figure 1). Pinduoduo’s active users are rising rapidly. Moreover, video sharing platforms like Duoyin and Kuaishou are increasingly being used to sell products on line. 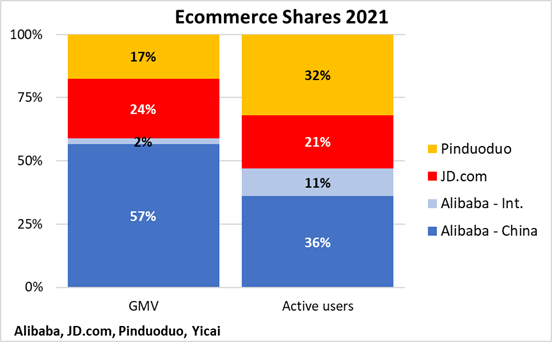 The Chinese ecommerce market appears to be maturing. The growth of online sales of physical goods has decelerated and their share of overall physical good sales has plateaued at one-quarter (Figure 2). 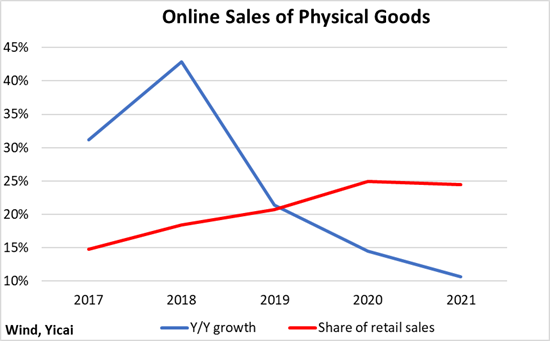 Faced with stiffer competition in an ecommerce market that is growing more slowly, Alibaba has been looking for new ways to reach the Chinese consumer.

Reminiscent of Amazon’s purchase of Whole Foods, Alibaba has invested heavily in providing groceries. In 2019, it created Freshippo (盒马), a combined bricks-and-mortar/online grocery store.  In 2021, it established Taocaicai (淘菜菜) a community marketplace, which targets smaller cities and rural areas. Alibaba is also reaching customers in these locations through Taobao Deals (淘特), which operates 10-Yuan and 100-Yuan Stores as well as providing online shopping.

Alibaba is making significant efforts to tap consumers in China’s extensive less-developed areas, where elevated logistics costs keep prices high and make online shopping less attractive. According to Alibaba’s earnings release, investments in Taocaicai and Taobao Deals were among the factors that led to a 22 percent drop in operating income in the fiscal year which ended on March 31, 2022.

While Alibaba’s profits were down in fiscal 2022, its cloud computing operations became profitable for the first time. Alibaba is the world’s fourth-biggest provider of cloud computing services and the largest in China. Unlike online retail, there is lots of growth left in China’s cloud computing market, which is expected to more than triple from CNY 300 billion in 2021 to CNY 1 trillion in 2025. Over time, we can expect Alibaba to look more and more like Amazon, which is number one globally in cloud computing services. In fact, in its fiscal year ending December 31, 2021, Amazon Web Services provided close to three-quarters of Amazon’s operating profits.

As major platform companies, both Alibaba and Amazon have come under close scrutiny from their local regulators. In April 2021, China’s State Administration for Market Regulation fined Alibaba CNY 18.2 billion for abusing its market power. Previously, the regulators had prevented Ant Financial, in which Alibaba has a 33 percent stake, from undertaking its initial public offering (IPO) in Shanghai and Hong Kong.

The US Federal Trade Commission has been investigating Amazon since 2019 over concerns with its retail business and cloud computing services. In January, the company was fined USD2.25 million after a Washington State antitrust investigation into its price-fixing behavior.

One big difference between Alibaba and Amazon has been the performance of their share prices.

Alibaba’s IPO was, at the time, of record size. Enthusiasm for the company was very high. When its shares began trading on September 19, 2014, they opened at a 35 percent premium to their USD68 IPO price. The price of Alibaba shares traded at a high of USD310 in October 2020, but has since fallen to USD93, not much higher than their first day of trading close to eight years ago (full disclosure: I own shares of Alibaba). In contrast, the price of Amazon shares has gone from USD330 to USD2300 over the same time (Figure 3). 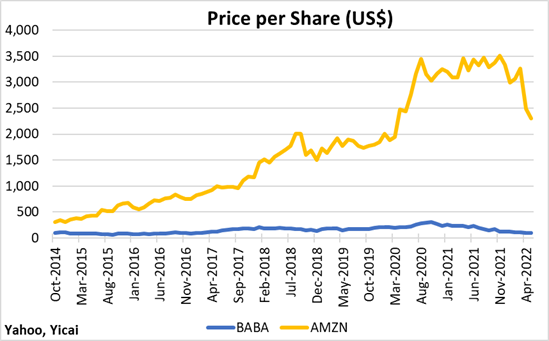 While it is never easy to predict how the market will value a company, it looks like Alibaba’s shares are a bargain compared to Amazon’s. Figure 4 presents actual and forecast earnings per share (EPS), based on Refinitiv’s survey of analysts. Amazon’s shares are selling at 43 times next year’s earnings and 27 times those of the following year. In contrast, Alibaba’s are selling at 10 times next year’s and 9 times the following year’s earnings. Alibaba is also less levered. According to Morningstar, its debt is 12 percent of its capital, compared to Amazon’s 46 percent. 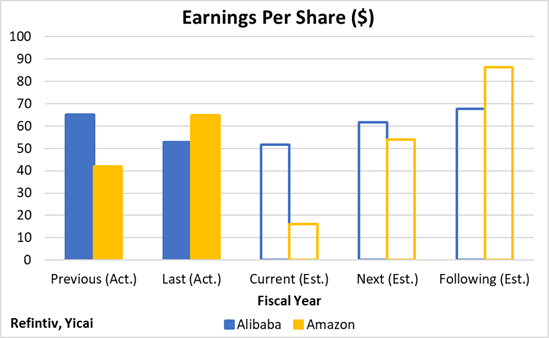 Given its leading position in both ecommerce and cloud computing and its sound financial fundamentals, the market is demanding a discount to buy Alibaba shares. This could reflect concerns about the health of the Chinese economy or the government’s regulatory stance or both.

These days, the future is uncommonly uncertain. Still, it does look like the Chinese economy is about to begin its recovery from the COVID-inflicted slowdown. Moreover, Premier Li Keqiang and Vice Premier Liu He both recently made statements in support of the platform companies suggesting that regulatory oversight will go hand-in-hand with the strategy announced in the 14th Five Year Plan to make digital technologies a more important part of the Chinese economy. Is it time to go shopping for Alibaba shares?