The US 'Indo Pacific' Framework Will Fail, Here's Why 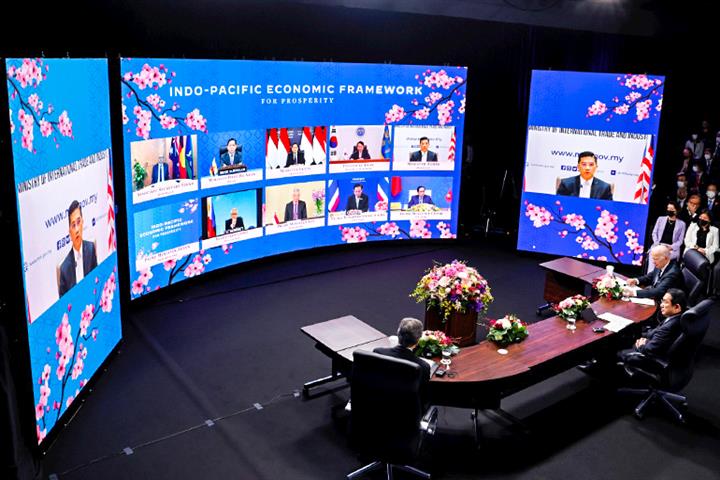 The US 'Indo Pacific' Framework Will Fail, Here's Why

(Yicai Global) May 24 -- On Monday whilst visiting Japan, US President Joe Biden launched the “Indo-Pacific Economic Framework” an initiative that claims to increase American economic engagement in Asia with the undisguised geopolitical of attempting to advance geopolitical containment of China. The White House has marketed the framework as aiming to “set the rules” of the region concerning supply chains, investment, and technology. However, the proposal has already been widely criticized by numerous voices precisely because, in practice, it literally commits or promises to deliver nothing substantial at all. The IPEF is in fact an initiative that is purely rhetorical, as opposed to institutional or legal, and expects its members to make commitments against the largest economy in the Asian region in return for absolutely nothing.

Based on its obviously political premise pushing against economic realities, it is obvious early on those expectations will be low and that the Indo-Pacific Economic Framework will not amount to much if anything at all. America’s economic engagement with Asia cannot progress unless there is a significant reversal of American foreign policy on a host of issues. First of all, the IPEF is a project based on the aspirations of political and military hegemony, not economic engagement, which blatantly goes against a trend of Asian regional integration spanning back decades. The United States is obsessed with containing China, and in doing so its foreign policy has been premised on a denial of Beijing’s importance to the global economy and a push to try and make other countries “take sides” against it, irrespective of the costs or economic realities at hand.

In doing so, the US has little pragmatism or empathy for the reality that as the world’s second-largest economy, and largest consumer market, amounting to 1.4 billion people, China has positioned itself as the nexus of the Asia-Pacific economy which has driven forwards integration with other countries, of which China is the largest import and export partner thereof. Not only is China part of the largest regional trading bloc in the world (RCEP), but it has deeply integrated bilateral trading agreements with almost all of its neighbours and has positioned itself as a critical source of trade and investment, with geography ultimately intertwining the economic fortunes of countries around it with Beijing.

The IPEF of course is premised directly on such a denial of this reality, of which fantasies of China’s isolation from the global economic system in a cold war-like fashion. Despite the fact the United States has pursued an aggressively protectionist domestic economic policy that has eschewed economic integration with Asia as undermining US jobs and competitiveness at home (hence Trump withdrew from TPP), the United States nonetheless it believes, sitting on the other side of the ocean, that it has a right to politically dominate the Asia-Pacific and dictate the economic outlook of the region despite that it both geographically and economically, is not willing to put skin in the game itself. The IPEF is based on a premise that Beijing can simply be isolated or ignored and that its own economic clout cannot feasibly be a “rule setter” if the United States is calling the shots.

This is without even considering the fact that the IPEF does not truly offer anything economically whatsoever. It pledges no investment, no market access, no institutions, no treaties, nothing. Its only substance is the manifestation of prime American arrogance and hubris, believing that China, the largest trading nation in the region, can somehow be isolated from regional chains. If there is one thing that manifests the political weakness and lack of promise from the project, it’s the fact that the US cannot even persuade its participants to admit Taiwan as a member to the body, despite its obvious Anti-China agenda, because of fear of yes… upsetting China, illustrating of course that the nations who participate in it have no intention to cross China’s red lines, because they have to live with China as a neighbour and economic partner. It also adds another dimension as to why a China-exclusive supply chain is impossible.

Given this, the IPEF will be limited in its results and not least its ability to coordinate anything, save in the unlikely event Washington is prepared to throw trillions at it. It is evident from day one countries involved in it will not sign up for Anti-China commitments or pledges. The United States recognizes it is of course losing the economic game in Asia against China but is unwilling nonetheless to make serious compromises because of the “America First” consensus ruling at home. As a result, this initiative is a bottom-of-the-barrel and face-saving compromise to try and give the impression it is committed to the region. Yet this initiative is for the most part hollow, useless, and even ignorant of regional trends in a vain attempt at geopolitics. China has no need to panic, and simply ought to continue in its ambitions to join the CPTPP. Whilst America brandishes slogans, Beijing will continue to produce results in a region it is an active and dominant participant therein.