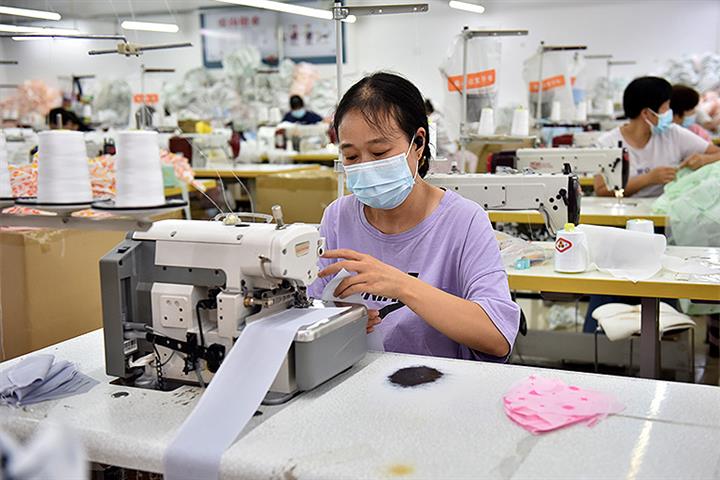 (Yicai Global) Oct. 28 -- China’s employment situation remains stable despite a relatively weak economic performance this year as the fallout from the pandemic continues. The platform economy has provided new opportunities and policy support remains strong, meaning that overall the long-term outlook for jobseekers is good.

China's urban unemployment rate was 5 percent in the three months ended Sept. 30, just below that of the same period in 2019 and marking a return to pre-pandemic levels, according to the latest official figures. Some 10.5 million people found jobs in cities in the first nine months, a 16 percent jump from the same period last year, and already achieving 95 percent of this year’s target.

Flexible employment driven by the new platform economy has helped. The platform economy has found work for 38 million ride-hailing drivers, 10 million couriers and seven million food deliverymen, as well as generated about 1.7 million jobs by outsourcing, according to the State Information Center. Jobs in offline service industries, though, such as hotels, restaurants and consumer goods manufacturing, are still under pressure.

It is worth noting that the youth unemployment rate remains higher than it was before the pandemic at around 14.6 percent. As of mid-April, 37.2 percent of graduates had not yet received a job offer, an increase of 13 percentage points from the same period in 2019, according to recruitment platform Zhaopin. It might be that some college students are less willing to look for low-paying jobs due to higher expectations.

The employment outlook for those who are having difficulty in finding jobs is better this year than in previous years. The government is providing plenty of support. Fiscal spending on social security and employment is 5.9 percent higher this year than last year and the growth rate of this expenditure is 4.1 percentage points higher than that of the total budget.

The government has also stepped up financial support to individual-run businesses as well as micro and small enterprises. China has more than 95 million self-employed individuals, which provide over 200 million jobs. Half of these are in the retail sector, around a quarter are in catering and 8 percent provide services to residents.

The government's shake-up of the education industry, distribution of social security for employees of internet-based firms, as well as more curbs in the real estate market, are conducive to improving the sustainability of economic development in the medium to long term, but may pose some pressure on the overall employment situation in the short term.

On the whole, although structural and phased employment pressures exist, they are all immediate concerns rather than long-term worries. With steady economic growth and the implementation of policies ensuring employment and the smooth operation of market entities, we expect the overall job situation to remain basically stable.