China’s Economy on the Rebound: May Data Review 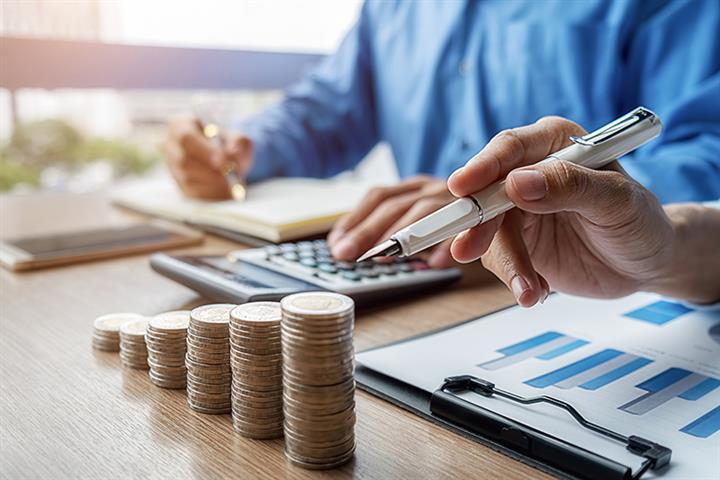 China’s Economy on the Rebound: May Data Review

(Yicai Global) June 21 -- Life in Shanghai is slowly returning to normal three weeks after the mobility restrictions were lifted. While it is hard to find a restaurant that allows eat-in dining, all of our favourite places deliver now and we enjoy five-star meals at home. The vegetable markets are open again but many storefronts are still shuttered and it seems that a lot of Mom and Pop enterprises will not reopen.

Perhaps the biggest change from life in March is the regular COVID testing. Taking public transportation and entering public spaces, like shopping malls, depends on having a negative COVID test that is no more than three days old. So, we test and re-test and test again.

Our compound sets up a testing booth in the garden that is open 7-9 AM and 6-8 PM. Just before 8 AM, I put up a pot of coffee, go get tested and, by the time I am back, my morning cup is ready. I usually receive my test results later the same day.

There is also a push to get older people vaccinated. Nationwide, 65 percent of those over 60 have received three inoculations, up from 55 percent at the end of March.

The data released last week by the National Bureau of Statistics (NBS) shows an economy which is clearly recovering from its April trough even if it is still operating well below potential.

The level of industrial value-added essentially returned to its pre-Omicron peak in May (Figure 1). Extractive industries have been particularly strong this year in response to higher commodity prices. The cumulative decline during this cycle was only one-quarter as large as the 2020 COVID episode. 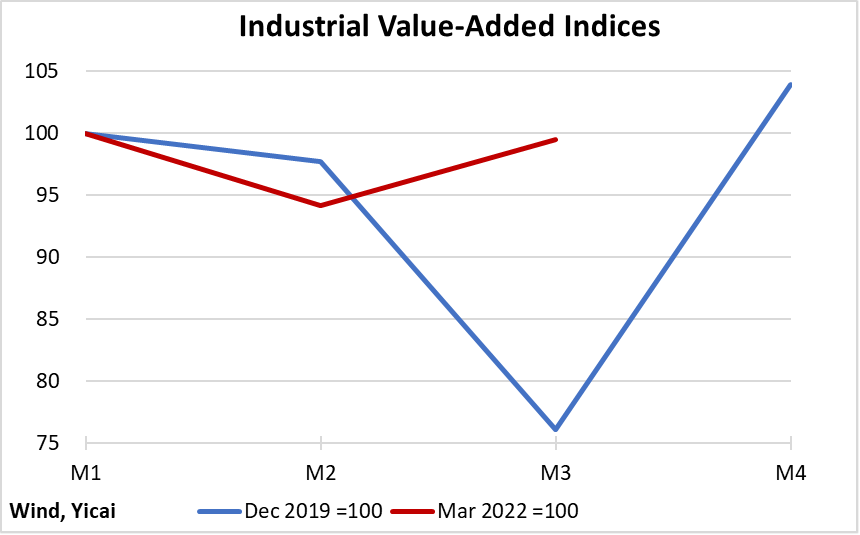 In contrast, we have not yet seen a recovery in retail sales (Figure 2). Nevertheless, the decline since the peak this year is only about one-third as deep as in 2020. It is no surprise that catering sales have been hit particularly hard, dropping by more than 20 percent from their year-ago levels. It is probably cold comfort to all the money-losing restaurants that the current decline is much better than the 40 percent drop registered in February-March 2020. 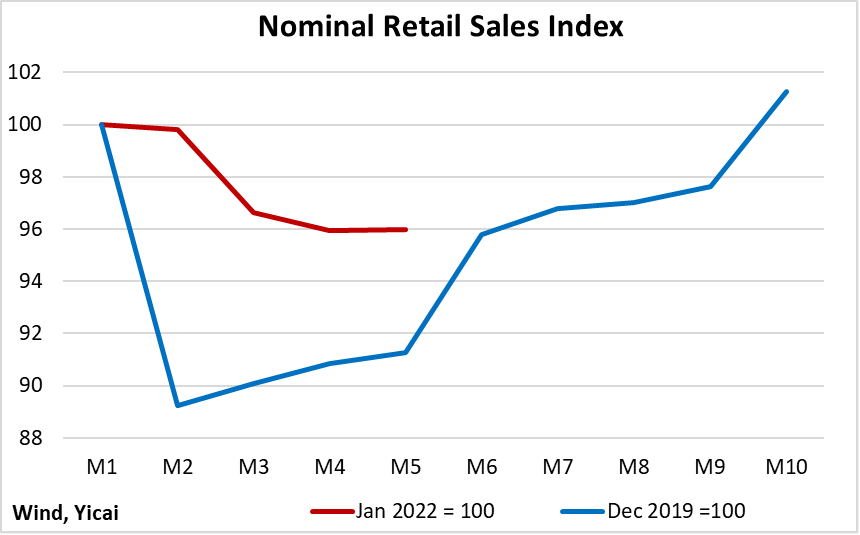 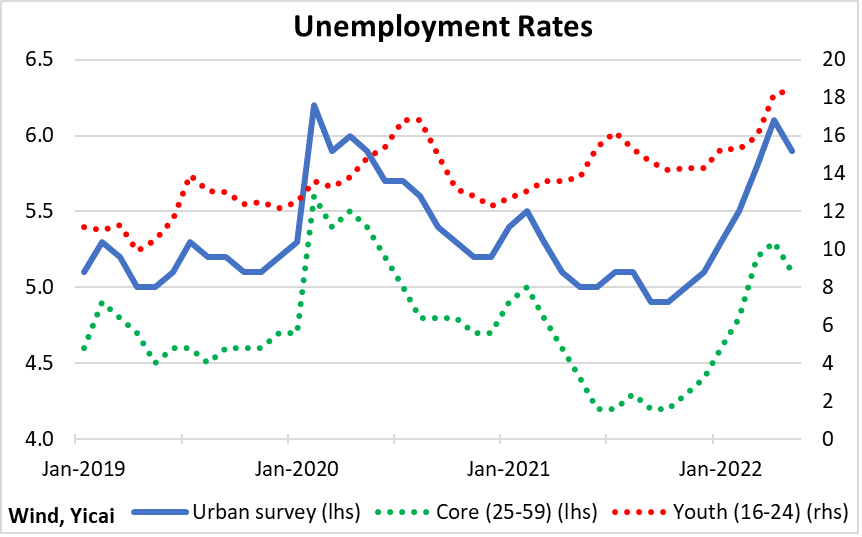 At 47.2, hours worked slipped slightly from the amount recorded in May 2021 (Figure 4). But they remain about an hour higher than in May 2019 and May 2020. This means that there is more than enough work to keep existing employees busy and that firms could begin hiring again as uncertainty over the economy’s prospects fades. 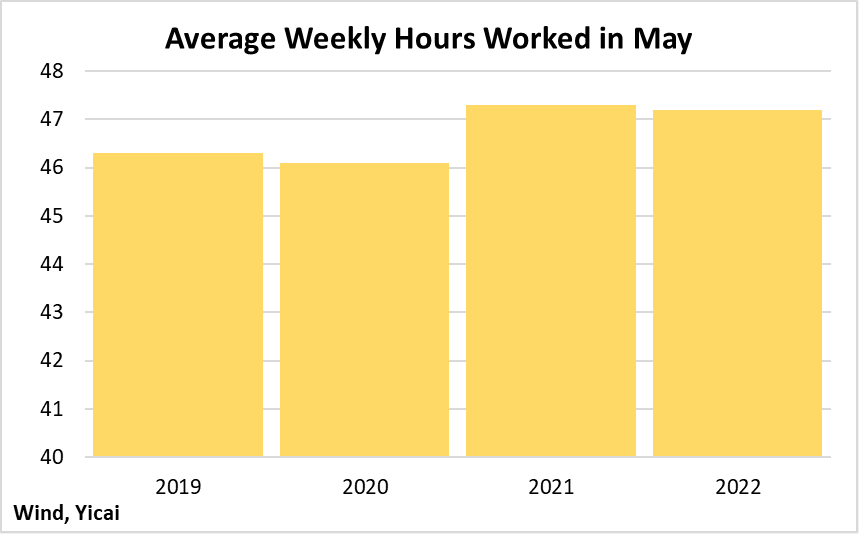 The Chinese real estate market has always been highly cyclical but the last two years have been exceptionally volatile (Figure 5). Financial constraints on developers, COVID and a very strong 2021 are all taking their toll on the housing market this year. In response, many municipalities have reduced down payments, cut mortgage rates and supported developers. If there is any good news in the housing data, it would be that the current level of demand should support 20 percent more housing starts than are currently being recorded. 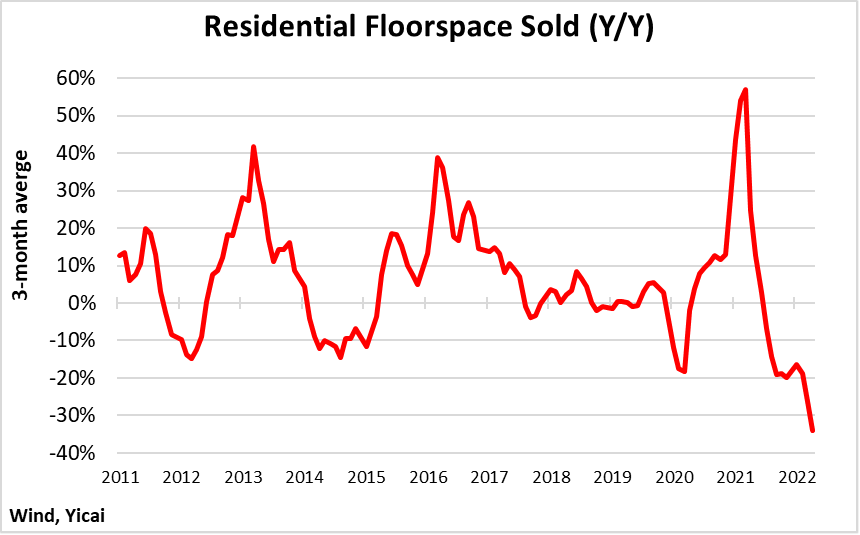 The prices of second-hand homes in China’s 70 largest cities were down 1 percent from January 2021 (Figure 6). All of the decline was recorded in third-tier cities. Prices in second-tier cities are the same as they were 17 months ago. The data indicate that prices in first-tier cities are up about 5 percent. But there is probably a lot of variation depending on where you live. I figure that the price of our apartment in Pudong’s Tangqiao district is down 10 percent from last year. But our place is still worth three times what we paid for it in 2012. 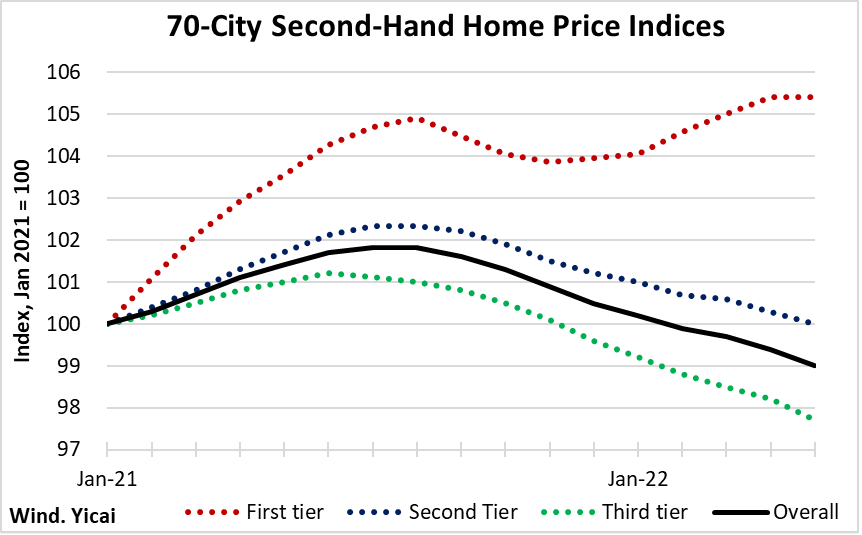 The property market will remain a drag on the economy this year and China will need to depend on other engines of growth. On May 31, the State Council released a package of 33 measures designed to facilitate the recovery. Foremost among these are tax relief and increased infrastructure spending. This policy will tilt investment toward manufacturing and infrastructure, a shift that is already underway (Figure 7). Real estate, manufacturing and infrastructure each make up roughly a third of fixed asset investment. Rebalancing investment in this way would not only maintain demand but also would improve the economy’s underlying productive capacity. 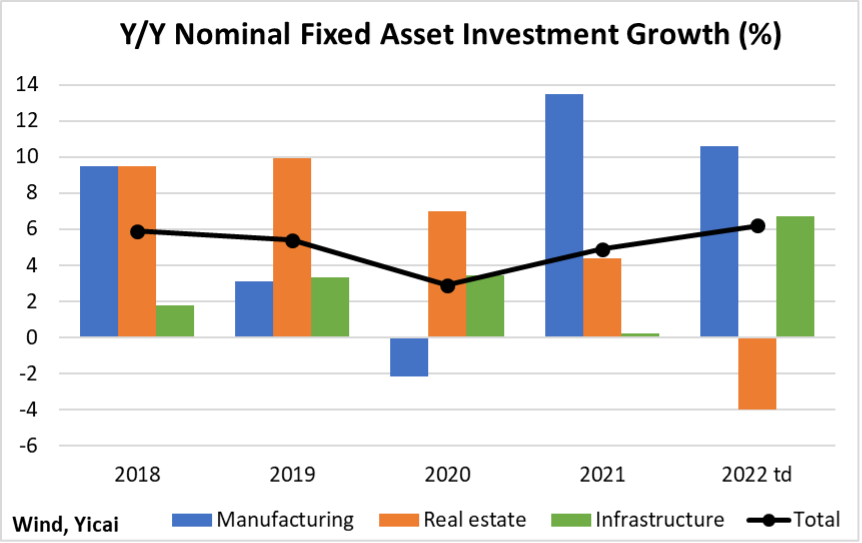 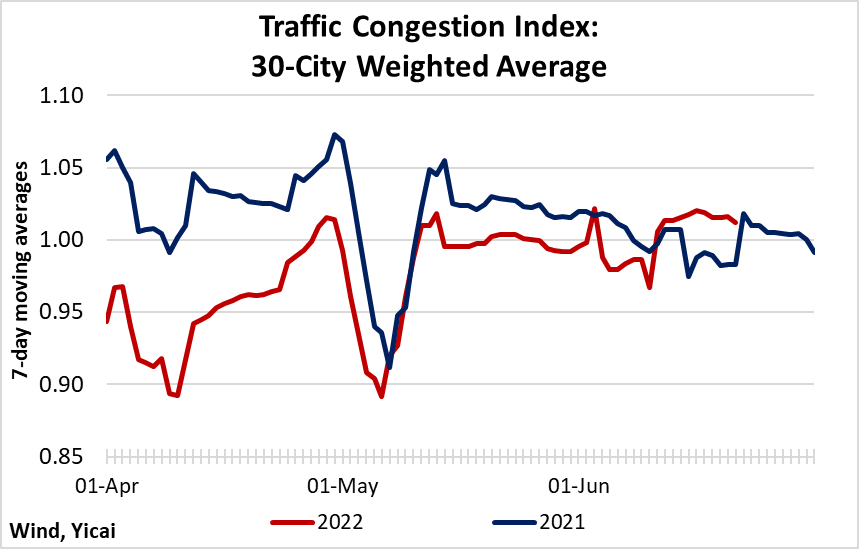 Our monthly GDP Indicator is based on the Y/Y growth rates of industrial value-added, the NBS’s service production index and a naïve estimate for the agricultural sector (Figure 9). The Indicator points to growth of -4 percent in April and -2 percent in May. Based on the improvement in the traffic congestion data, year-over-year growth of 0 seems reasonable in June. If the second quarter’s GDP evolves along the lines suggested by the Indicator, growth would come in at -2 percent year-over-year. This would be considerably stronger than in 2020Q1, when growth was
-6.8 percent. 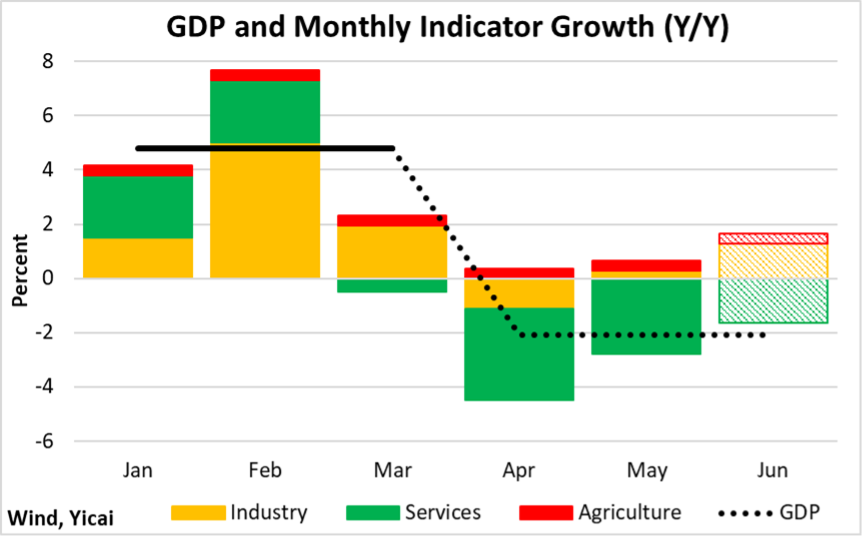 Economists have become less bullish on the external environment. For example, the World Bank recently reduced its forecast for global growth in 2022 from 4.1 to 2.9 percent. It attributes this “sizable” reduction to the surge in food and energy prices, supply and trade disruptions triggered by the Ukraine conflict and interest rate normalization. Moreover, the Bank sees a “considerable risk” of stagflation – low growth and rapidly rising prices.

The World Bank’s forecast implies that the demand coming from China’s trading partners will remain below trend for a number of years to come. Indeed, looking out to 2024, the Bank sees one-third of the output lost during the pandemic still not being made up (Figure 10). 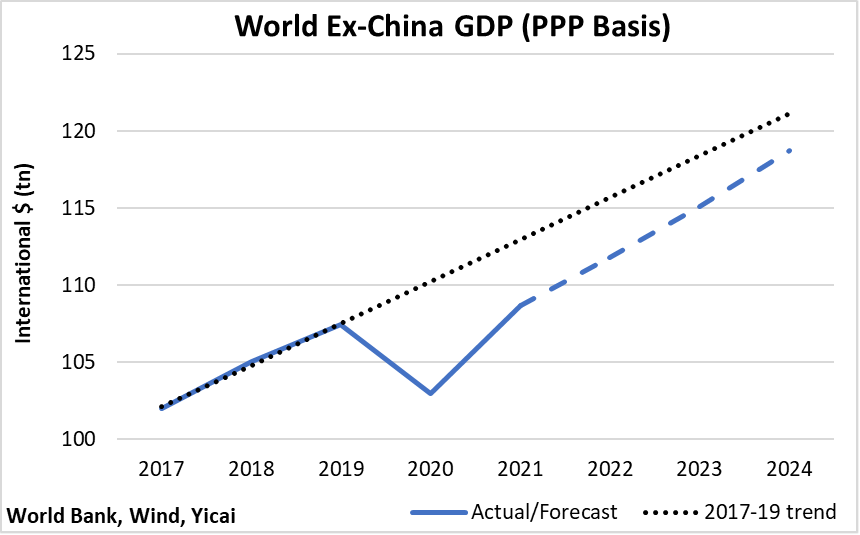 Does that mean it will be difficult for China to make a full recovery this year?

China’s trading partners growing at 2.8 percent this year will be significantly more supportive than the 4 percent decline recorded in 2020.

Moreover, China has become increasingly competitive in recent years. China’s share of global exports has risen from 13 percent in 2017-19 to 15 percent in 2020-21. This increase in competitiveness has come from industrial upgrading and effective COVID control that left China’s supply chains relatively intact.

Thus, despite below trend demand, China’s exports have continued to grow rapidly.  They took off in the second half of 2020. Then they rose by 30 percent in 2021. And, notwithstanding the Omicron outbreak in April and May, they are up 13 percent so far this year (Figure 11). 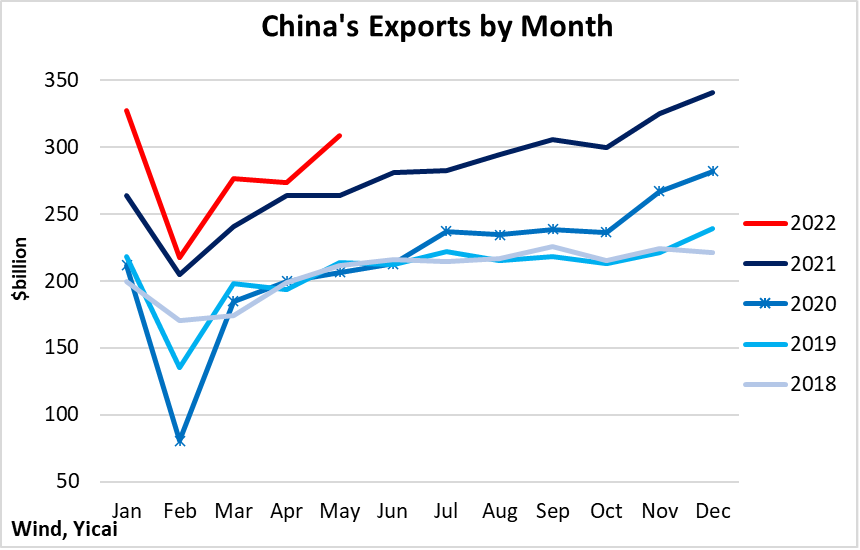 In addition, China is relatively insulated from the macroeconomic pressures identified by the World Bank. Foremost among these is the rise in global interest rates. The latest “dot plot” shows the Fed Funds rising by some 2 percentage points to peak at 3.8 percent in 2023.

The US economy can withstand an interest rate increase of this magnitude. The risk is that the Fed Funds will have to increase by significantly more to reduce inflation. A recession in the US could ensue. Moreover, emerging market economies that borrow in foreign currency could come under significant pressure.

At some $2.7 trillion, China’s gross external debt is significant. However, it is a relatively small share of China’s GDP and it is fully covered by its foreign exchange reserves (Figure 12). 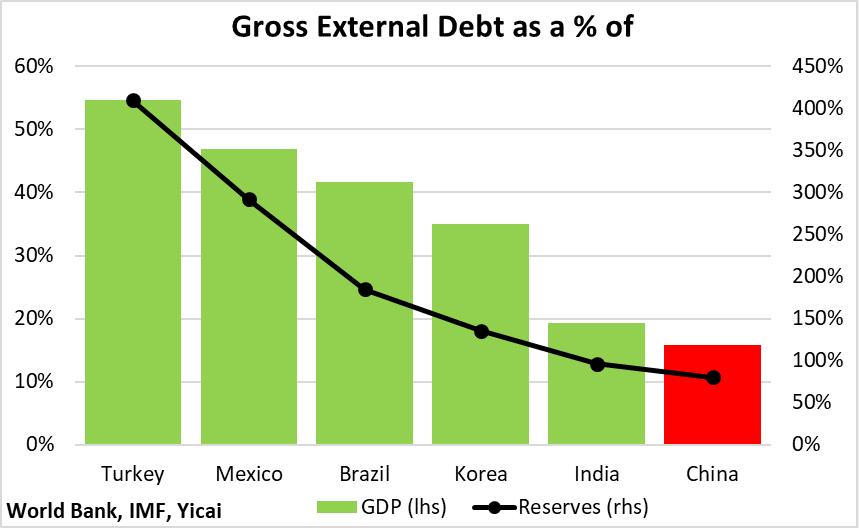 In 2020, the Chinese economy rebounded rapidly from the Q1 COVID shock, with the level of GDP essentially returning to its pre-pandemic trend in the third quarter. This time around, the “Omicron Shock” looks to be much smaller and the external environment is more supportive. While there are risks, China’s sound macroeconomic fundamentals provide reasonably thick insulation.